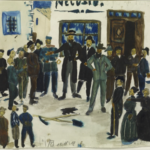 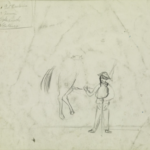 I’m working on a new series of posts about Alberto Giacometti’s drawings and paintings. Giacometti is the guy who made the big tall skinny guy sculptures. They look like this: 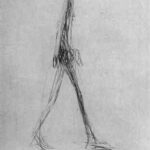 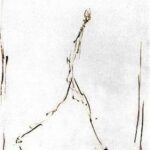 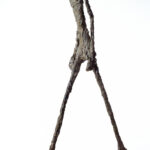 For my post, I searched for Giacometti’s early works and found artworks from 1910. Alberto was born in 1901, so in 1910, he would have been about nine. Nine years old was a little farther back in his career than I had intended to go, but I found these delightful and wanted to share. 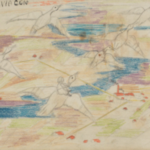 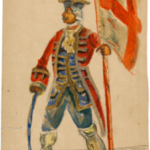 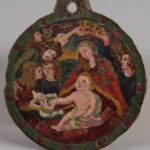 Alberto Giacometti, After Botticelli : the Madonna of the Magnificat, oil on slate 3×3 inches, 1915

Alberto Giacometti was exposed to art early in his childhood, as he was the son of the Swiss impressionist painter Giovanni Giacometti. You’ll see Giovanni’s influence in Alberto’s painting of Bruno at the end of this post. Alberto had access to the art books in his father’s library, and would draw from masterworks. Here we have a single piece of paper that shows his development: on the front of the paper appears to be a study of another artist’s work, signed “Giacometti Alberto”. On the back Alberto’s sketch is more in the style of a young child, drawing from imagination. 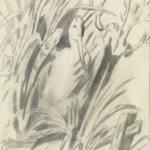 Alberto Giacometti, Bird in the Bushes, 1911 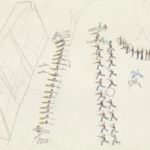 Here are a few more of Alberto Giacometti’s artworks, from his early teens. You can see how dedicated he was to being an artist already. In 1914, Alberto would have been around 13 years old. 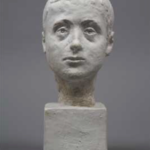 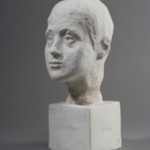 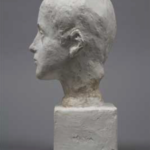 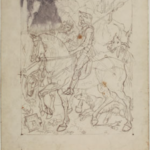 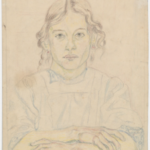 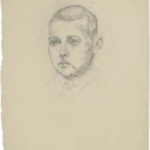 Alberto Giacometti, Portrait of a Child, 1915 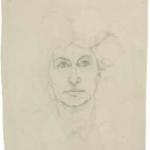 Alberto Giacometti, Portrait of the Mother, 1915 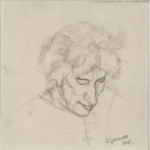 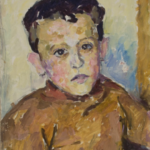 Giacometti’s show at Seattle Art Museum opens July 14, and we’ve got special workshops coming up in the fall. I’ll be posting more of Giacometti’s artworks soon.