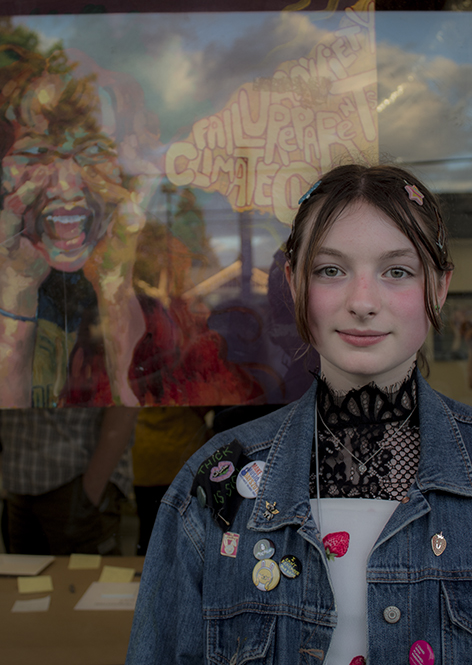 Sponsored by the Seattle Artist League

The Modern Youth Identity was a fine art show put together by teenage curators, showcasing teenage artists. Alice Mao and Taylor Wang worked together with Ruthie V. to assemble this show of artworks from countries all around the world including Seattle, Brazil, China, Canada, and Europe. The show was featured in the Issaquah Reporter and Northwest Asian Weekly.

Local artists attended the reception in their best, and several out of town artists flew in to see the show. The League was packed with a diversity of smiling faces. After the reception, Mao and Wang welcomed nearly 100 guests over the short Labor Day weekend that followed. The show was such a success, and the young curators were so charged to be able to share these artworks, these dynamoes are already making plans for the next Student Art Spaces show!

Below are a few of my favorite works, followed by a slideshow of opening night highlights captured by Jonathan Matteson. 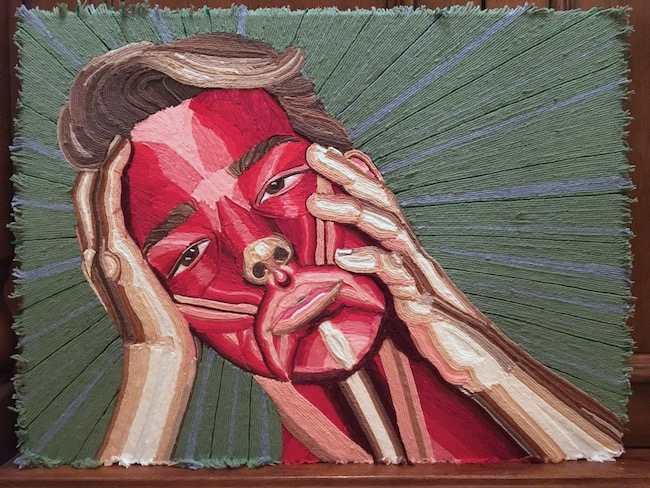 This unique and intricate threaded mosaic by Seattle artist Nicholas Horcher @nphdraws was a bold viewer’s favorite. When asked how he learned to do this, he said he just figured it out. 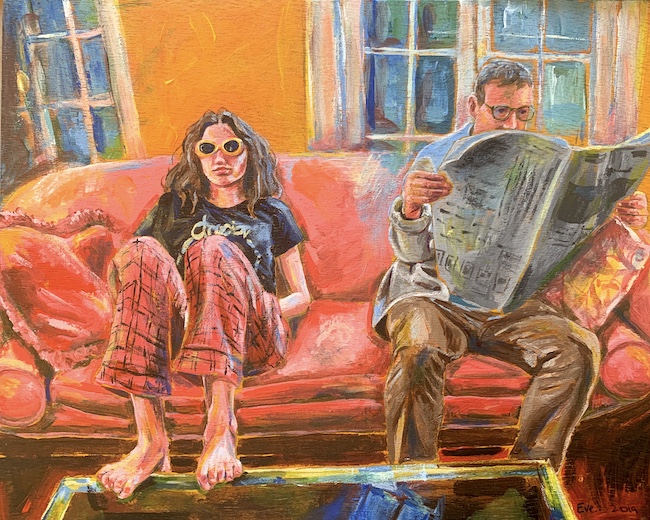 Eve Timberlake Smith, a young Seattle painter, showcased her playful brushstrokes in this small portrait of the artist and her father. 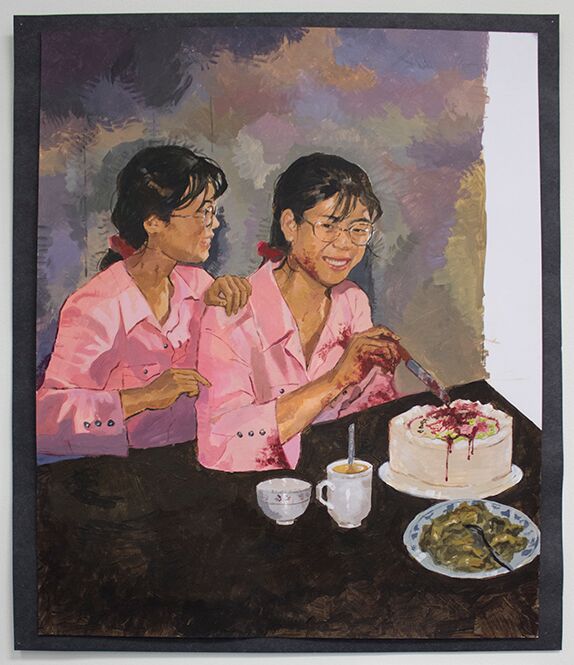 I admired and enjoyed the uncomfortable imagery in this painting about Chinese families with high expectations. The artist is Angela Bi @unmeimeii

The pose of this unusual diptych is referenced in the graphite writing: “I had to do it to em.” To help me get the joke, I received a lesson on the meme it references.

Love this work on paper by Conner Jhoon Choi @mountainsparrow contrasting traditional Korean landscape against the central figure. Pieces are charmingly collaged and the brush work is beautiful. 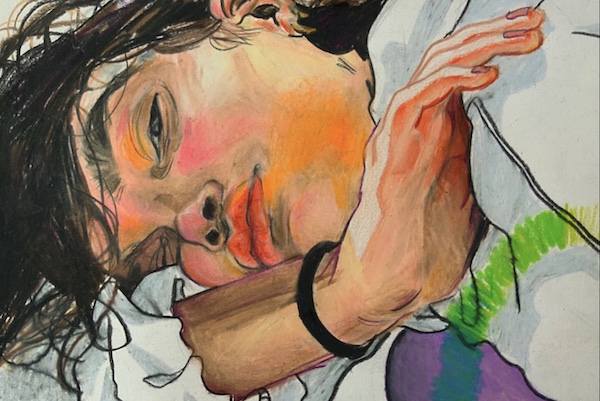 This sensitive piece by Alexia Giselle Gonzalez references mental illness, and a moment of self compassion. 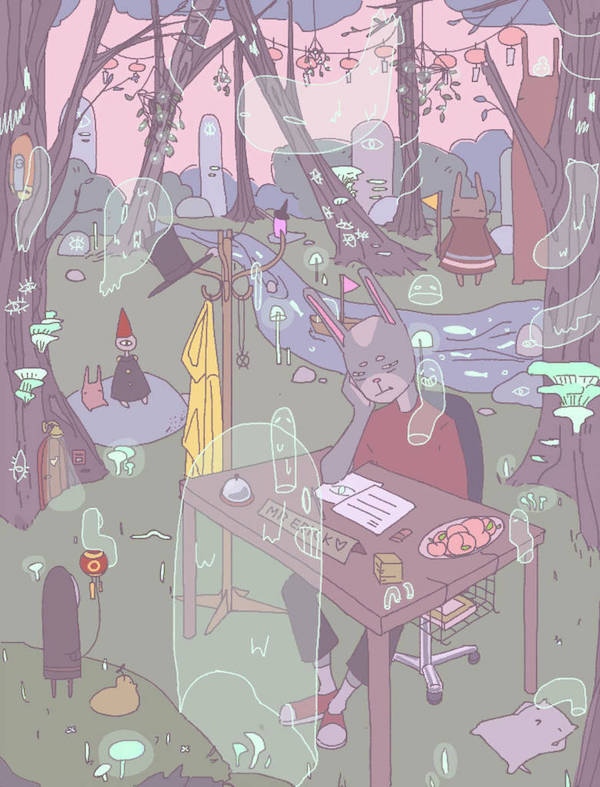 The color palette on this playful illustration is superb. The artist “Natasha” is from Lithuania. 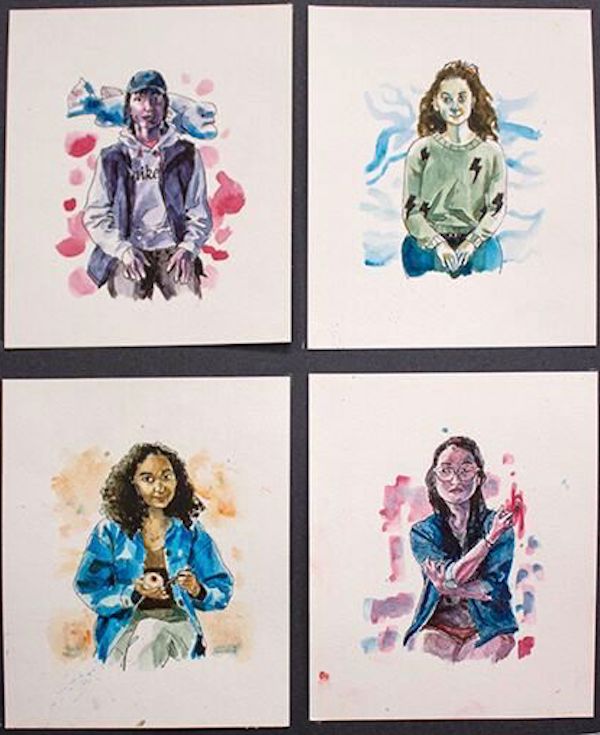 I didn’t get this series of watercolor portraits at first glance. Then I noticed the fish, and that caused me to question what the heck was going on. After that the finger flying off the hand, the eyeball, and…. finally I saw the spider on her head. Portraits of fears by Elise L Hebert @seascribbling 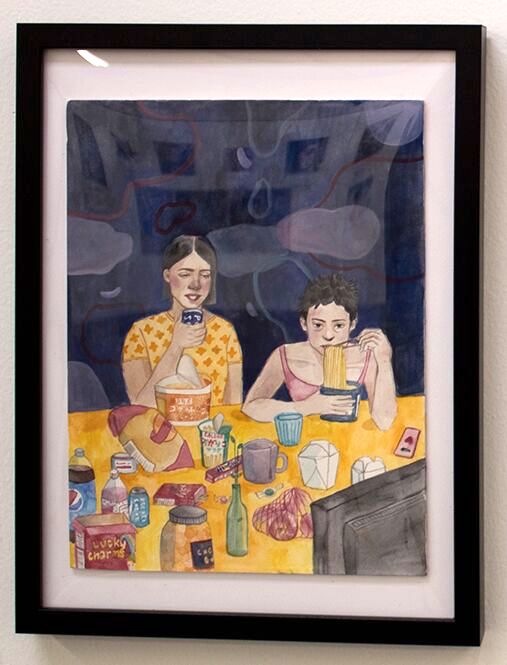 I thought this watercolor piece by Marlowe Pody @Maybemarlo was sensitively rendered. 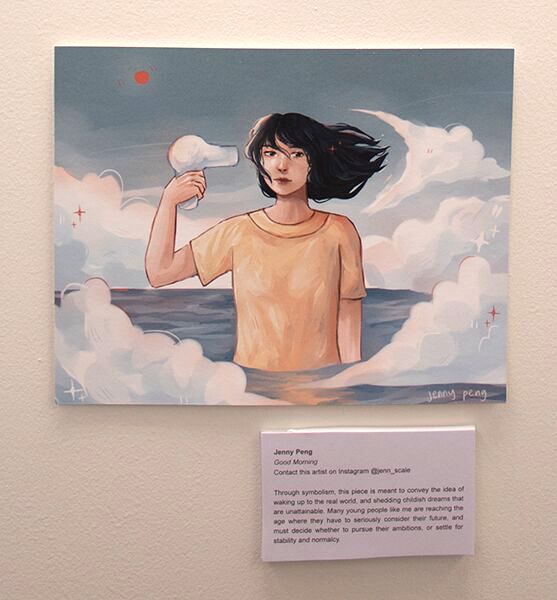 The beautiful skill clearly applied to this illustration had me curious about the meaning. Jenny Peng’s artist statement illuminates it is about “the idea of waking up to the real world, and shedding childish dreams that are unattainable.”

The repeated tragedy of school shootings was part of this show. The students talked about the fear of deadly violence in their schools. One artist created her first political piece: a series of sparrows and gunshot targets. 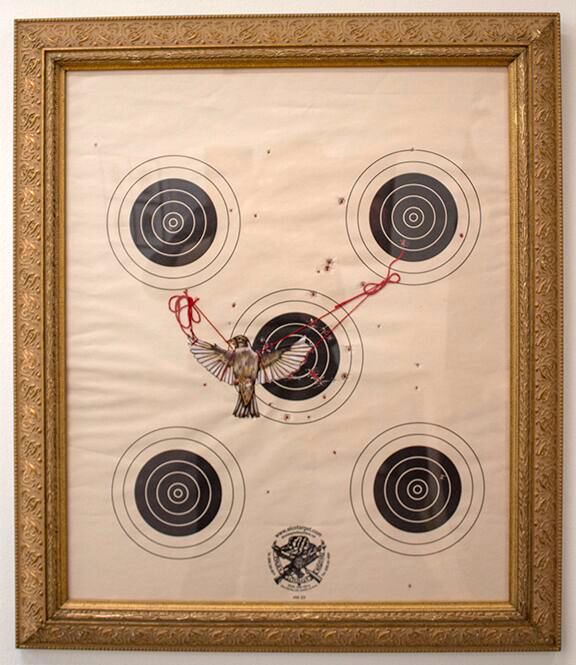 To accompany her first political piece, Autumn “Mussey” Blaylock
@musseyart says in her statement: “I began planning this piece shortly after the Parkland school shooting in February of 2018. However, it wasn’t until I was actually in Washington, D.C. when March for our lives was happening that I really began working on it. The threat of school shootings is something that’s all too prevalent in children’s lives. It’s something that I’ve grown up with (even the earliest major news broadcast I can remember was Sandy Hook). As students we feel helpless, most of us aren’t eligible to vote so most of us can’t do anything about it. In this piece I’ve represented students as sparrows, which are very delicate creatures, and put them in a tragically metaphorical scenario in which they are trapped. As students we do feel trapped, as students we are quite literally targets.”

The Slaughter of the Songbirds put voice to a horrifyingly common experience of Generation Z.

School shootings also stopped an artist from attending the reception. It saddened us all to hear that Claudia Marlenne Jasso Garcia was unable to attend the opening due to a school shooting in her area. The artist was not injured, but the shooting impacted members of her family and friends. Claudia Marlenne Jasso Garcia, we love your artwork, and we admire your strength. 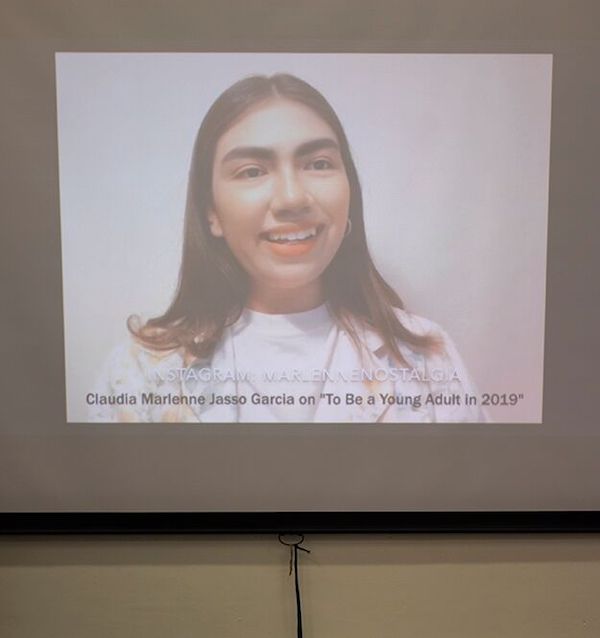 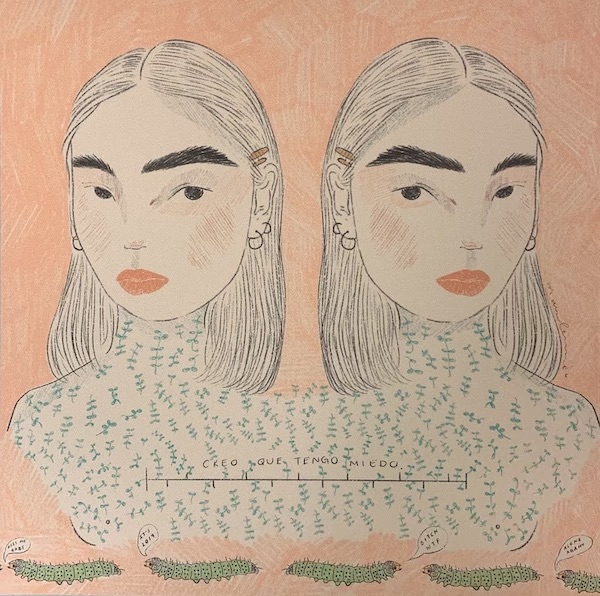