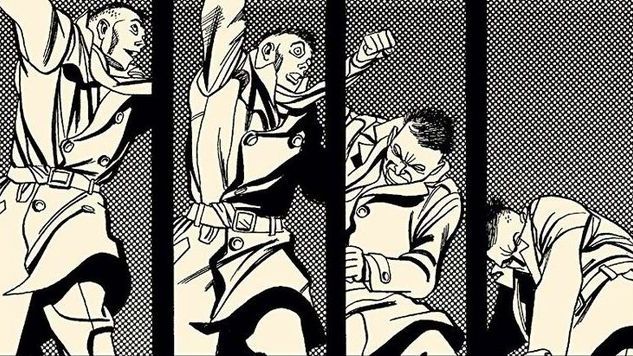 “My futile idea was that action in comics, as in any art, doesn’t end with one person pounding another person in the jaw. There’s also the action of emotion, psychology, character and idea. I yearned to have stories which dealt with more reality and people’s feelings and thoughts . . . a kind of literary form, let’s say even a Chekhovian form, where one could delve into real people and real feelings.” – Kringstein

Even though his proposal to illustrate Bill Gaines’ and Al Feldstein’s story of “Master Race” was cut from 12 to 8 pages, Kringstein’s panels are never cramped. The compositions are well balanced and well paced. Drawing from observation, his disdain of comic shortcuts and easy symbolic solutions such as sweat marks and action lines pushed him to articulate action and emotion by using a painter’s language of expressive figure studies within “high brow art” ideas of composition and form.

The work of Kringstein had a strong influence on more recognizable names such as Art Spiegelman, and Frank Miller.

So if you have ever looked at a comic and admired the visual storytelling, you likely have Krigstein to thank.

As Spiegelman put it in the New Yorker, “Krigstein began to vibrate with the inner language of comics, to understand that its essence lay in the ‘breakdowns,’ the box-to-box exposition that breaks moments of time down into spatial units.”

Inspired to draw but want a little guidance? We have a great Comics workshop happening at the League this weekend, open to all ages and skill levels. This is a new genre for the League, and we are hoping to expand it. Gap assistance available. If you are a new (or previous) fan of Krigstein, apply the coupon code KRIGSTEIN to receive 20% off.