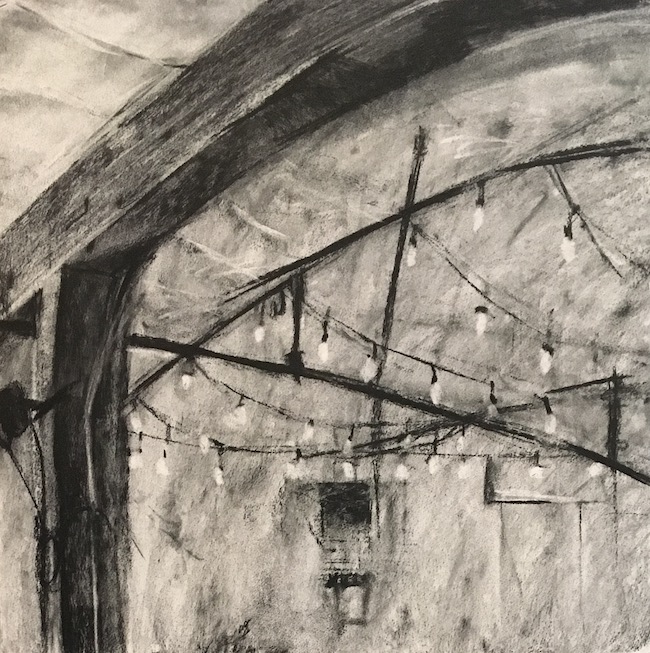 My sketch of warped (real) perspective

I’m in Portland, taking a 3-day figure drawing intensive with Fran O’Neill. I had a lovely day of drawing, and I learned something new I’m excited to explore. In my sketch of the interior, I straightened the beams, because everyone knows beams are straight, but Fran pointed out that our vision is actually curved because our eyeballs are curved, and that was something for me to consider.

Unconfirmed: Euan Uglow is said to have cut a table into a curve, because then when measured from his viewpoint, the table looked straight. If this is true, perhaps it was this painting. 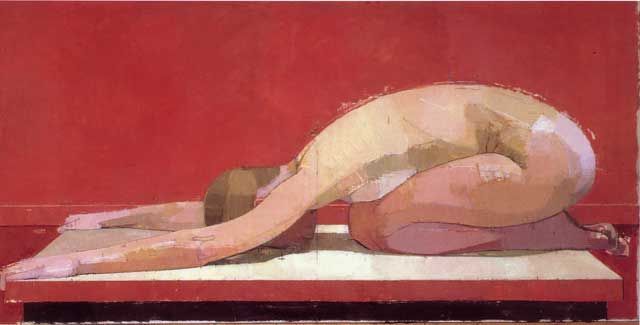 My thoughts so far have separated this warped perspective into two potential causes. First, when we look directly at something such as a pipe or an architectural beam, when in front of us it appears to be straight, but if we don’t move our eyes, it might be that the object slightly bends in our peripheral vision. Try this yourself and see.

Second, when I turn my head to draw an environment I’m standing in, the angles change as I look around the room. The beam above my head “bends” as do the pipes in the ceiling.

I had noticed this before, I had taught the Cone of Vision to my perspective classes, but I had never really thought about it as it applies to drawing as an accurate representation of my experience. Eureka! What an idea! Today I attempted to draw my point of view without “logical” correction. I felt naive and very curious, which is a wonderful state to draw in.

[/vc_column_text][nectar_image_comparison image_url=”14406″ image_2_url=”14405″][vc_column_text]Fran also suggested I back off quickly formed lines and edges, and instead make incremental steps, allowing the drawing to grow more slowly in between smaller more truthfully measured lines. These lines… they move. Turning my head to look in front and then above caused my angles to change significantly, which became quite a challenge to draw, but I enjoyed the process, and the product was interesting. I am determined, and excited to draw again tomorrow.

I am adding this idea to my Cityscapes drawing & painting workshop May 11/12. Interested?[/vc_column_text][/vc_column][/vc_row]