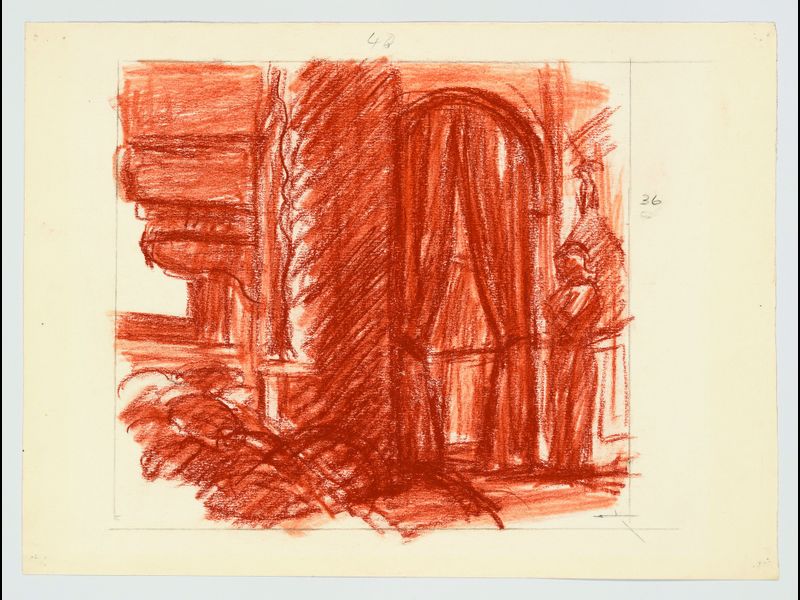 Recently I posted about Edward Hopper’s influences in painting and printmaking. This is part three of four (I think). Today is all about Hopper’s process. There is some of my own actual near-thinking and observation, plus a lot of internet research went into this, but I had trouble finding much for details that went beyond the basic “blah blah blah Hopper is the greatest painter of the 20th century blah blah blah.” The most helpful and interesting information I found was from the book Edward Hopper, by Lloyd Goodrich. If you’re interested in Hopper, I highly recommend checking out this enormous and insightful book. There’s a copy here at the League…. 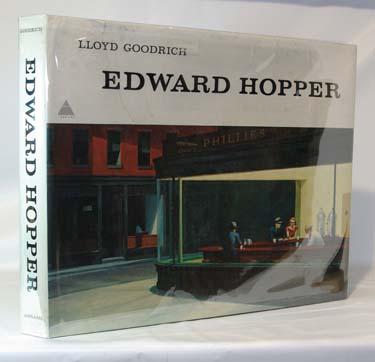 Hopper’s paintings are not literal copies of reality. Some of his early oils and almost all his watercolors were painted “from the fact” as he put it. After his early years, Hopper’s oils were composed by a process of imaginative reconstruction in which both observation and memory played parts. Almost all of his later oils were composites.

“More of me comes out when I improvise.” – Hopper 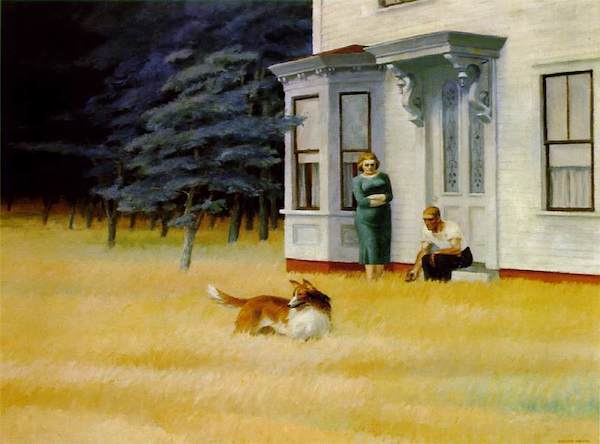 The first of Hopper’s paintings were made in a matter of weeks. Mid and late career, Hopper slowed down to produce only one or two paintings a year. Hopper selected the subject with care, spending a months thinking on the composition. He collected elements from various sources that he would combine and transform into the full image of his painting.

“It is no exact transcription of a place, but pieced together from sketches and mental impressions of things in the vicinity. The grove of locust trees from done from sketches of trees nearby. The doorway of the house comes from Orleans about twenty miles from here. The figures were done almost entirely without models, and the dry, blowing grass can be seen from my studio window in the late summer or autumn. In the woman I attempted to get the broad, strong-jawed face and blond hair of a Finnish type of which there are many on the Cape. The man is a dark haired Yankee. The dog is listening to something, probably a whippoorwill or some evening sound.” – Hopper 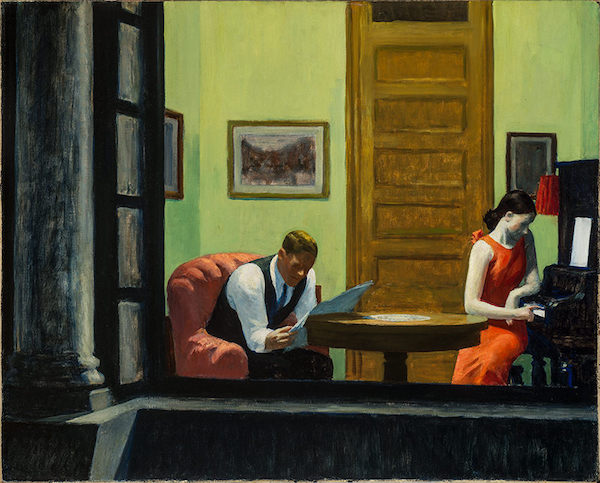 “…It was suggested by glimpses of lighted interiors seen as I walked along the city streets at night, probably near the district where I live (Washington Square), although it’s no particular street or house, but it is rather a synthesis of many impressions.” 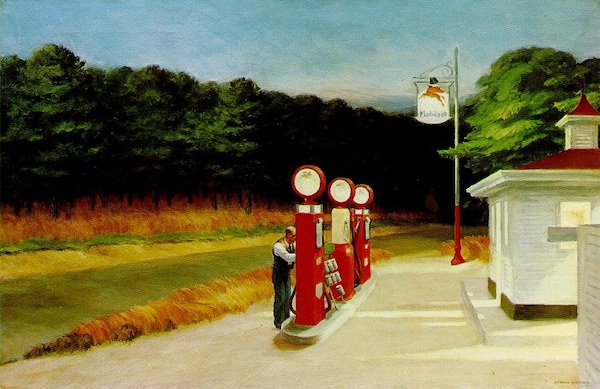 Hopper said he searched for a filling station like the one in his mind. Unable to find it, he made one up out of parts of several gas stations. 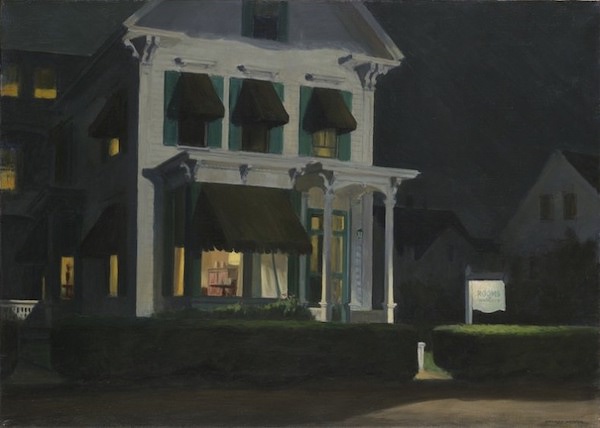 This painting is uncharacteristically true to the original form. Rooms for Tourists was an exact portrait of a real house. Hopper painted this house in Provincetown from his studio, with nightly observations from his parked car, which aroused the suspicions and fears of the owners. 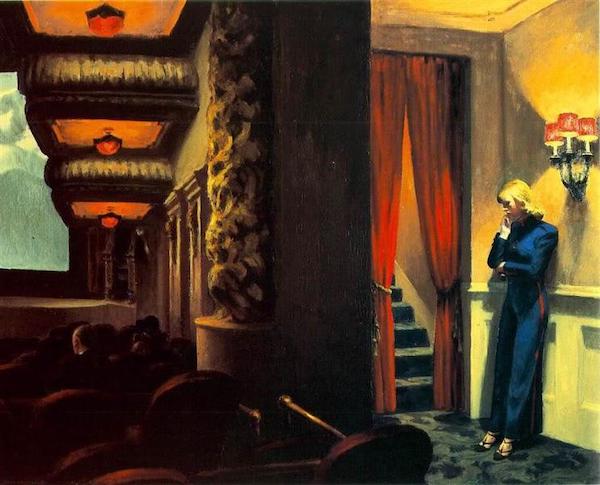 Most of Hopper’s mid and late career oils were thoroughly planned in a series of drawings before he put brush to canvas. Many on-the-spot sketches were made of details of pieces of the scene, such as the theater interior in New York Movie. With complex paintings there might be as many as thirty or fourty sketches. For the figures, more finished studies were drawn.

For outdoor scenes there would often be detailed drawings, with written color notes. 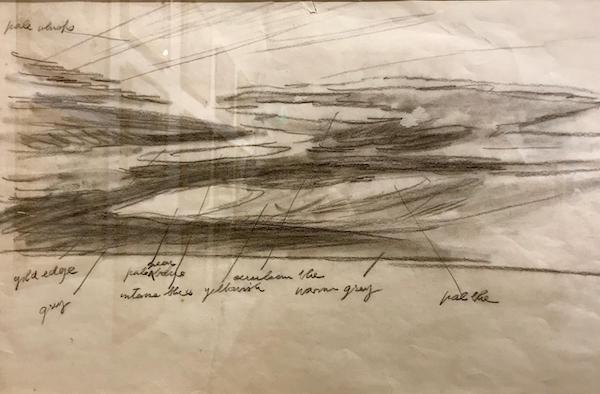 For Night Noon Hopper built a small cardboard model of the house and placed it in sunlight to get the exact pattern of light and shadows. 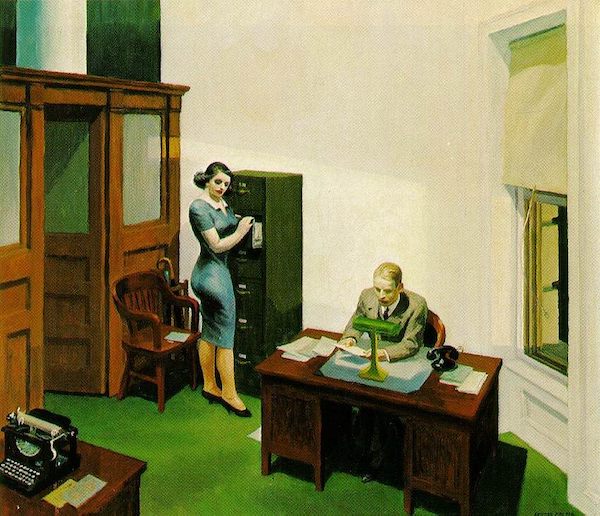 The studies for Office at Night below show how the original conventional composition was changed into the more interesting diagonal structure of the finished painting. Hopper worked his compositions out in series’ of sketches, however, he was careful not to finish the drawings too much, as he might copy them rather than flushing out the concept in his mind. For this same reason, he did not paint color sketches for his paintings. He believed that the best method was to work it out on the canvas. 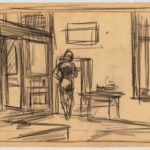 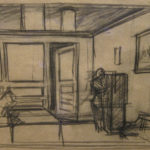 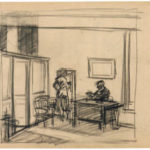 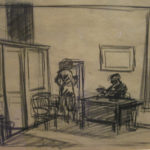 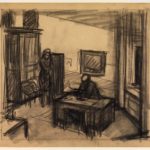 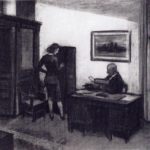 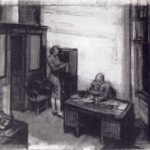