Edward Hopper is one of the greatest American painters of the 20th century, having influence over photography and cinema as well as painting. His direct and realist paintings depicted light and shadow, and solitude in daily contemporary life. But what influences did Hopper have?

Rejecting the style of his time, Hopper was most influenced by painters such as Courbet, Eakins, and Homer. These painters of the mid-to-late 1800s influenced Hopper’s compositions, brushwork, and his use of color and value, as he avoided the pastel colors of the impressionist and modern painters completely. These 19th century compositions are based on value just as much as they are based on color. In black and white reproductions, the compositions hold up well. This is not true for modern or impressionist paintings that sometimes fall apart without color. Hopper gained an appreciation for heavy dark forms, and weighted contrast colors such as reds and greens. Hopper almost never painted grey. 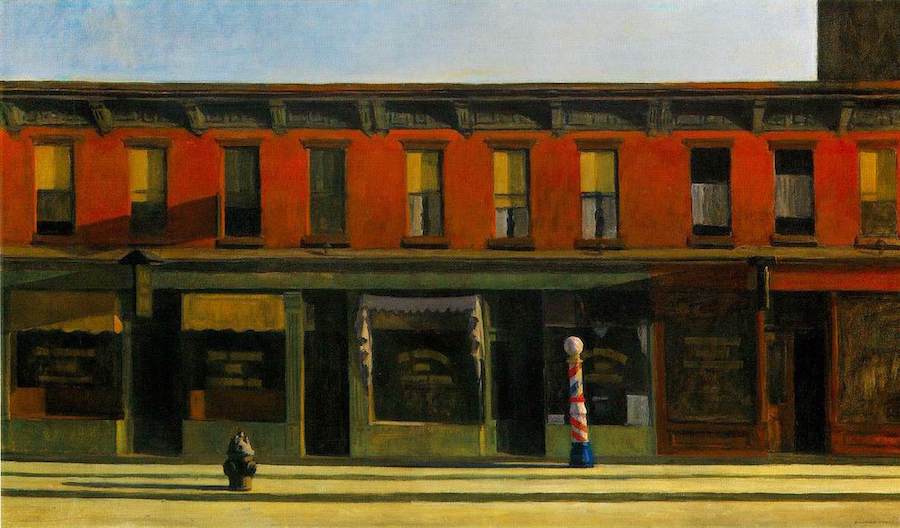 Eakins (1844-1916) was an American painter, photographer, and sculptor. In his figurative paintings, Eakin’s brushwork is similar to Hopper’s. Notice the thick brush strokes, the unblended swaths of thick color that make up the surface. Shown below: two comparisons of Eakins/Hopper figure studies. Eakins is on the left, Hopper on the right. [nectar_image_comparison image_url=”12231″ image_2_url=”12232[nectar_image_comparison image_url=”12237″ image_2_url=”12235 You can see that in the early years (above), Hopper’s paint application was more fluid. It would later become more textural and thick, his brush strokes smaller and his paintings much slower to make than these relatively quick studies. 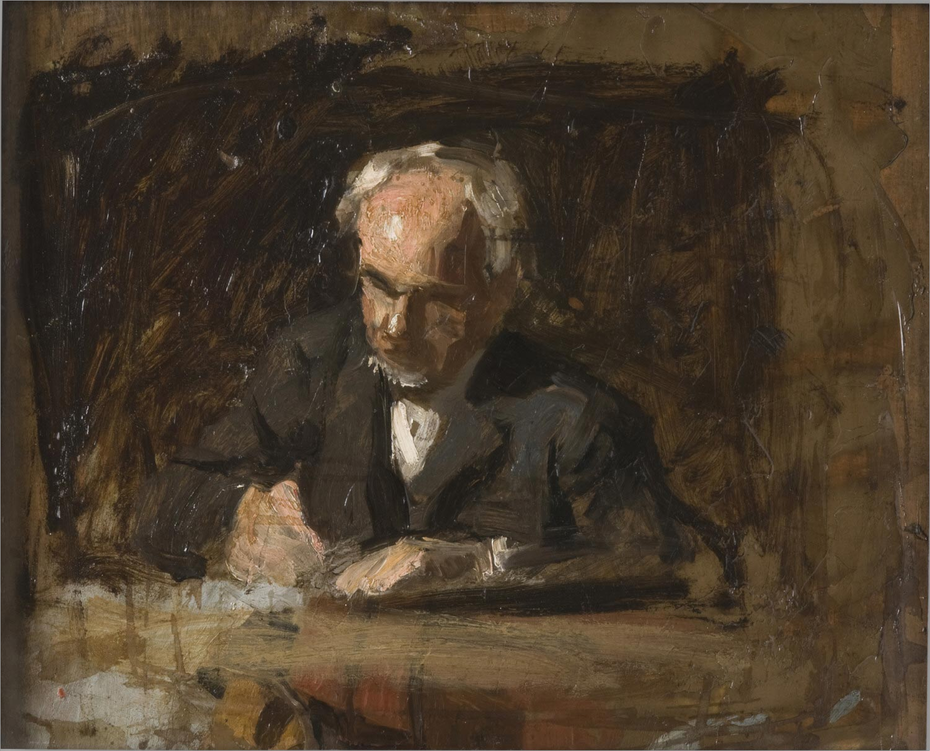 Homer (1836-1910) was an American landscape painter and printmaker. His landscapes and seascapes often depicted people seaside with boats. 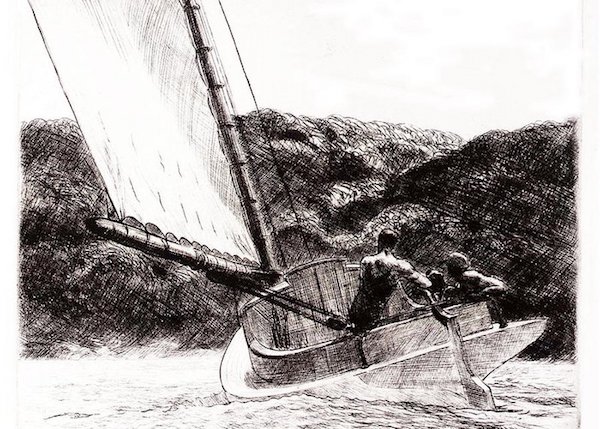 Homer’s compositions often included strong diagonals, or wedge shapes as the base of his canvas. Horizontals are stabilizers in a composition. Verticals have lift energy, but are also stable. Diagonals are dynamic. They destabilize, and get the composition moving. Imagine the compositions below without the wedge at the base. Boring? 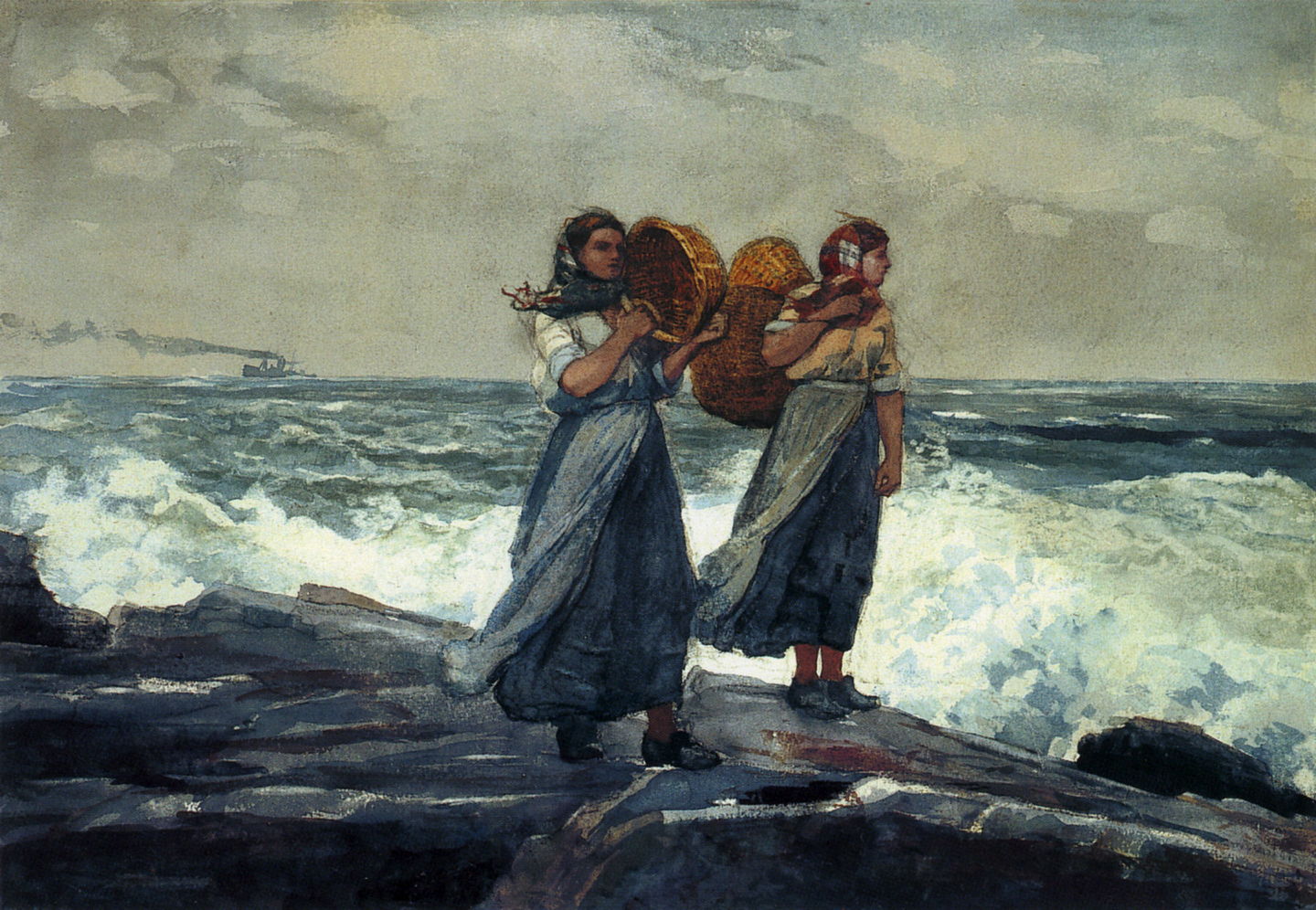 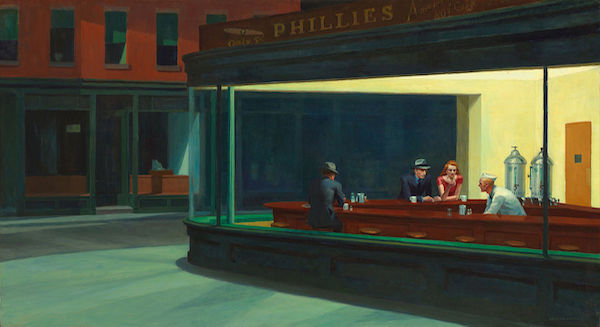 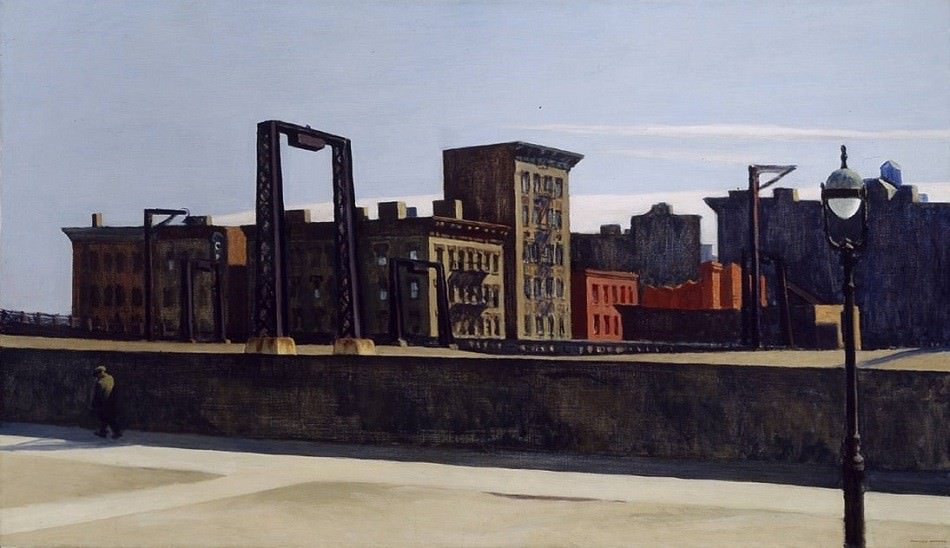 Hopper, Manhattan Bridge Loop (this wedge is nearly horizontal, but you get the idea)

Hopper’s trips to Paris in 1906, 1909 and 1910 were pivotal in shaping his personal style. While abstract movements such as cubism and fauvism took over Europe, Hopper preferred the works of the impressionists, particularly those by Claude Monet, Edouard Manet, and Edgar Degas, whose use of light and color had a lasting influence on Hopper’s art. Hopper preferred the colors and the harmony of France to the chaos of New York, and often chose scenes that focused on a related sense of quiet. Shortly after his trips to Paris, Hopper began a more intentional exploration of light and shadow on architectural forms, as compositional devices. This would later become one of his hallmarks. 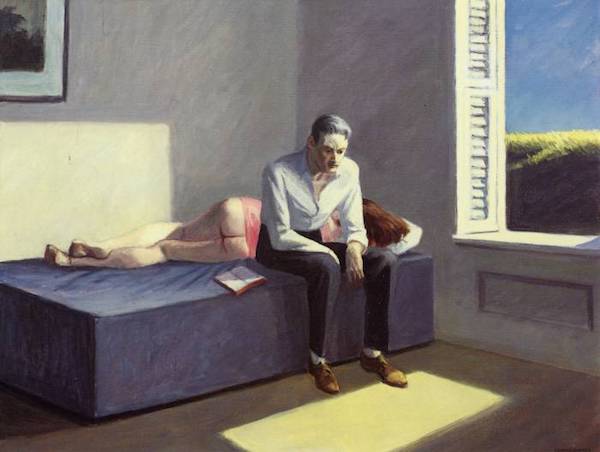 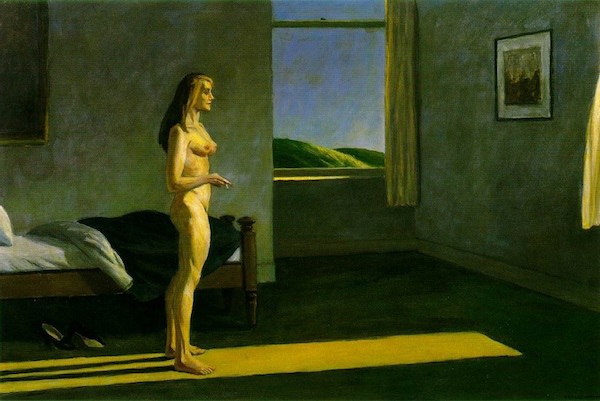 Hopper, A Woman in the Sun

I guess I’m not very human. All I really want to do is paint light on the side of a house.” – Hopper