[image_with_animation image_url=”9204″ alignment=”center” animation=”None” box_shadow=”none” max_width=”100%”] Yesterday I posted a fragment of a sculpture and asked you to guess when it was made and who made it. I worded my question to be misleading by asking specifically “who” and “what year.” Some of the guesses I received were:

Thank you for your guesses! I posted this sculpture because I was so taken aback by how contemporary it looked. In truth, this is a fragment of an ancient Olmec mask, dated 300 BC.

Map from Misfits and Heroes; New Thoughts on Olmec Art

This Jade face might represent the Olmec Maize God. According to the Met Museum, the Olmec Maize God can be identified by his upturned lip. Many of the masks weren’t worn on the face, but were likely used as belt buckles, on headdresses, or as necklaces.

More information is found on Misfits and Heroes; New Thoughts on Olmec Art:

The earliest Olmec sites presently known date to 4000 years ago ( about 2000 BC).  By 1400 BC, Olmec artisans were creating amazing earthworks, stonework, and ceramics that still captivate the viewer.  To their 19th century discoverers, Olmec cities seemed to have sprouted full-blown out of the earth, complete with sophisticated directional alignment, symbolic writing (which we still can’t decipher), a complex set of spiritual beliefs, and finely crafted stonework, much of which was imitated by the Maya and other peoples who came to prominence after the Olmec faded. 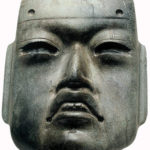 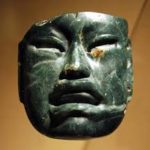 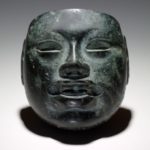 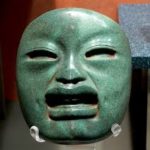 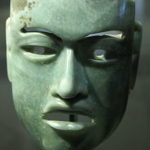 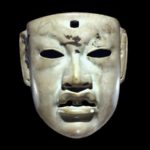 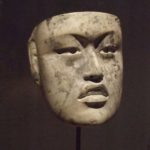 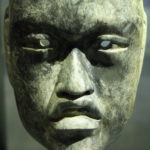 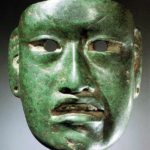 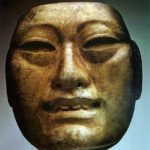 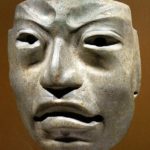 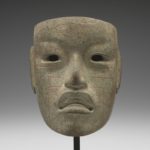