Hiroshige lived from 1797 – 1858 in Edo (now Tokyo), Japan. He was a Japanese woodblock artist, one of the last great masters of the woodblock print. His brilliant landscape compositions found their way to the West (Japoniseme), influencing Impressionists and Post-Impressionists such as Degas, Manet, and Monet. The Japanese styles of imaginative drawing, flattened picture planes (absence of linear perspective), colors, A-symmetry, and diagonals in compositions revolutionized the way Western artists composed their works. Without Hokusai, Impressionism might never have happened.
From Kiama Art Gallery:

After Japanese ports reopened to trade with the West in 1854, shiploads of  oriental bric-a brac began pouring into France.  In 1862, a Far Eastern curio shop called Le Porte Chinoise opened near the Louvre Museum, attracting artists visiting the gallery. It sold fans, kimonos, lacquered boxes, hanging scrolls, ceramics, bronze statuary and other items. … In 1867,  Japan held its first formal arts and crafts exhibition at the Paris Exposition Universelle. The exhibition attracted a great deal of interest and resulted in all things Japanese becoming stylish and fashionable. Shops selling Japanese woodblock prints, kimonos, fans and antiquities popped up in Paris like mushrooms.

I learned about Hiroshige through rice sprinkles. When I was a kid I used to get ochazuke, Japanese rice sprinkles that turned leftover rice into a breakfast soup (it’s yummy), and there were little woodblock cards in each packet. This was a small part of a larger Japanese campaign to keep historical folk-arts alive. A recent, and slightly uncomfortable version of cultural art in snack packs is Bob Dylan’s lyrics in China’s potato chip bags. Call me a snob, but I am partial to the Edo period, and though both are salty, think I got the better education from my rice sprinkles.
Ando Hiroshige, Utagawa Hiroshige, and Ichiyusai Hiroshige. Was there a lineage of Hiroshiges?
Nope. They’re all Ando Hiroshige. He was born Ando, but used Utagawa and Ichiyusai professionally. If anyone knows why, please chime in. 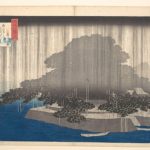 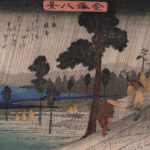 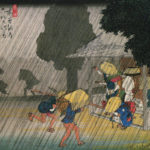 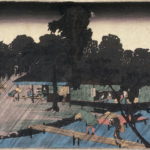 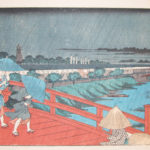 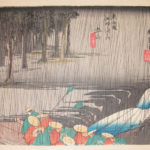 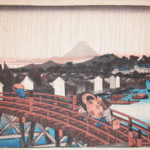 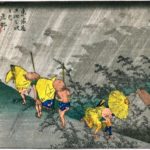 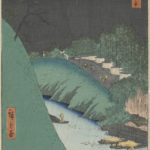 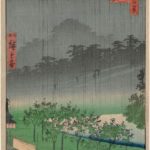 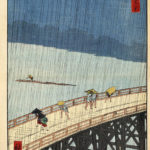 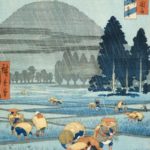 A cold rain starting
And no hat –
So?