[image_with_animation image_url=”8958″ alignment=”” animation=”None” box_shadow=”none” max_width=”100%”] Alex Walker, an Especially Enjoyable student in my Intermediate Studio class, decided to work on making his brushwork more direct and decisive by doing a study of John Singer Sargent’s portrait of Henry James. Since his pilgrimage to see it in London brought the sad news that the painting was in storage, we both took a good long look at a high res picture of the portrait on Wikipedia to see how much we could learn about Sargent’s approach. We knew Sargent was a champion of “putting the color where it goes” painting wet into wet and never blending, but we wanted to learn more about the brushes, colors and layering he used to make this particular painting. Here is what we saw. 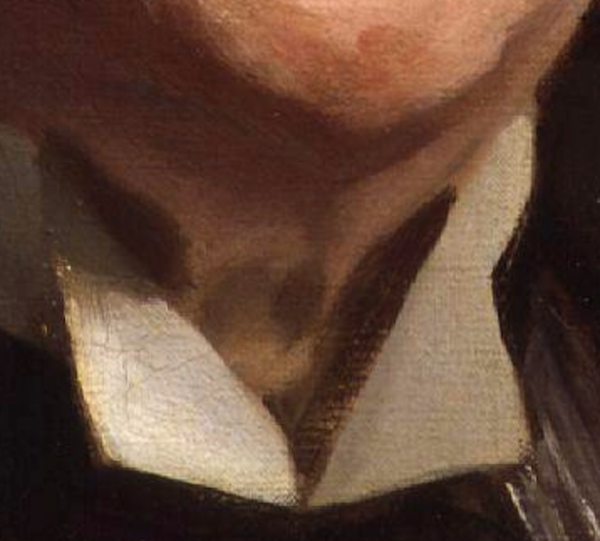 The visible brush strokes are all either round or pointed. While Sargent does have some nice crisp areas of flat such as on the collar, I can’t see any brush strokes – not even on the collar – that show a flat start. A flat start would indicate a flat brush, so I’m guessing Sargent painted primarily with rounds. 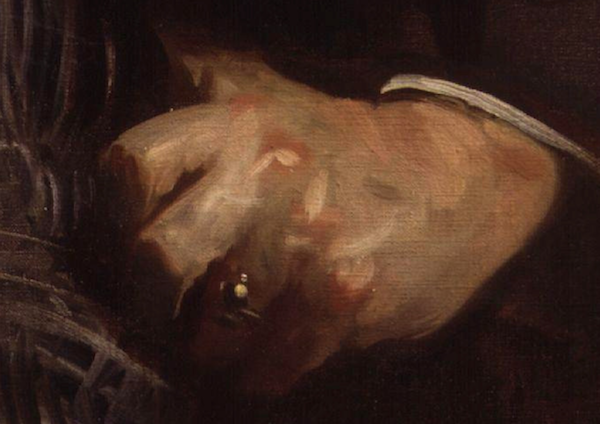 Filbert brushes can be turned for wide and narrow strokes. Round brushes can be shaped into a point for line work such as the stripes in the vest, and details such as the gold chain and ring. They can also make rounded brush strokes, similar to the brush strokes made with filberts. Combine the two traits of the round brush for pointy-round brushstrokes like the highlights in the hand. Definitely the rounds hold more paint. Given Sargent’s reputation for ample paint application in the foreground, and the subtle way the brush strokes varied, I’m guessing he used the rounds for smaller areas, and the filberts for the large and medium areas. Alex has one small round, and a couple filbert bristle brushes that seemed serviceable, so he had enough to do a rough approximation of the general style.

Alex already has tape around the handle of his brush, and tape on the floor in front of his easel to remind him to hold the brush in Sargent’s long-armed baton position, and to remind him to stand like a fencer. Now that we’ve got the right brush and the right stance, how else can we emulate our Sargent?

The background showed signs that the canvas was a fine, smooth weave (no big bumps of multiple warp and weft threads), and his first coat looks like burnt umber with very little on top, and no white, so I suspect he did his underpainting sketch with burnt umber thinned with turpentine so there was some glow from the canvas, and the umber either dried between sittings, or dried while he worked other areas of the painting (umber is a quick drying color, so when mixed with turpentine or mineral spirits, underpaintings can often be painted over in a single session). I don’t know how long he spent on this particular portrait, but it looks to me like the basic layers (underpainting, blocking in simple planes in two values, then adding the in-between values or “mid-tones,” all the way to the end where he’s adding the thickest foreground highlights/shadows) all this could possibly have been done in one or two sittings. That could be deceptive though, because I know even the paintings he worked on for months were made to look like they were done in one sitting. Still I see some clues. 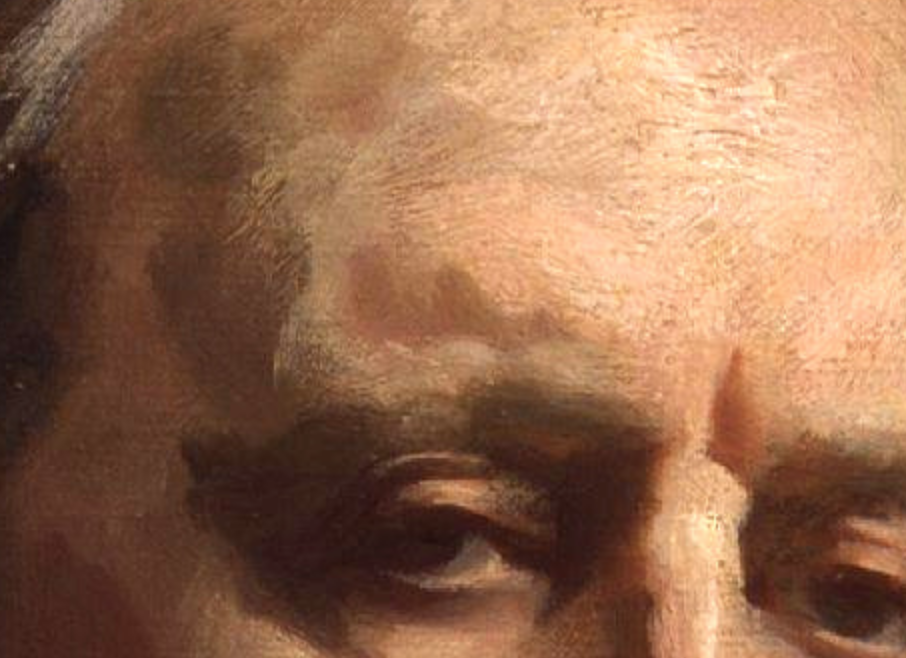 True to his style, there are no layered glazes requiring dry time between coats. Most of the brush strokes have been painted wet into wet, with just a few moves (such as the brow, and the shadow below the nose and the lip) look like they were wet into dry-ish. To see the speed of the painting, at least the way he wanted us to see it, look at the stripes on the vest. That was clearly done in one.

I’m guessing his medium was turpentine (we use the healthier “Gamsol” mineral spirits now), and stand oil – a thickened linseed – but not all of it was done this quickly, because some of the brushstrokes like the brow stand separate from the others – they weren’t painted wet into wet.

For colors, I was guessing burnt umber, raw umber, ivory black, burnt sienna, something like yellow ocher only more mild, lead white, and some sort of red, likely an oxide. While black mixed with white often looks blue in this palette, I do see some evidence of an actual blue. I’m not sure what it is because it doesn’t match any of the blues in my normal palette. It’s similar to ultramarine but lighter and more… um… bluish. I looked up the colors Sargent was known to use, and found several conflicting lists of pigments. I did find this helpful chart of modern equivalent pigments in W&N colors (pic right), and a great post on Gurney Journey, which gave a list of pigments scientifically identified on Sargent’s palette using UV tests. Here’s what James Gurney had to say about the organization of Sargent’s palette:

The colors start with a large amount of white forward of the thumbhole, and proceed through the yellows, reds, browns, blues, greens and black at the back.

UV illumination reveals two kinds of white paint: lead and zinc. It also shows “numerous droplets of resinous material which fluoresces orange in UV, scattered predominantly around the white paint, and one reasonably large blob of wax on the palette surface.”

The colors include vermilion, red lake, red ochre, yellow ochre, cadmium yellow, a green containing chromium, Prussian blue, cobalt blue, ultramarine, and umber. Observers watching him work said his colors were piled in “miniature mountains,” and they were the ones in ordinary use, the earth colors predominating.

Although Sargent kept his brushes meticulously clean, he was not as scrupulous about keeping the colors on his palette separate from each other. The paint is mixed in the areas where the paint was squeezed out, rather than keeping the edge-colors distinct, as some painters do.

So the blue I couldn’t recognize is cobalt?

Cobalt is a color I’ve yet to use in my own paintings, but Alex had some and when we mixed it with the burnt sienna and a bit of white it matched the painting exactly – both in the shadow of his face, and on the lighter side. It’s cobalt!

Honestly, a search for Sargent’s list of pigments resulted in several websites definitively listing colors, and each list was different, so who knows. He likely shifted a few pigments over the years, but here’s my best guess given my smidgeon of knowledge with historical pigments, and this Wiki pic:

[image_with_animation image_url=”8974″ alignment=”” animation=”None” box_shadow=”none” max_width=”100%”] Now we’re looking at Sargent’s bold brush moves: take a look at these bloppity blop blop shadows! This was very unusual for classical painting at this time. Typically shadows are painted in thin, but look how thick and blotchy these are! Look at the big booger shape under the nose, and the slug under the lower lip, two more at the base of the neck. The paint is just as thick as in the highlights, and painted as subtle as lettuce on a tooth. Wow, Sargent. Despite my astonishment at realizing how chunky it all is, I do believe you made it work, you savvy canvas stabber. Posted on the National Portrait Gallery website:

The American-born novelist Henry James settled in England, at Lamb House, Rye, in 1898. By the time this portrait was painted he was at the end of a career which had seen the success of early novels such as Portrait of a Lady (1881), followed by the late masterpieces The Wings of the Dove (1902) and The Golden Bowl(1904). This portrait was commissioned to celebrate James’s seventieth birthday by a group of 269 subscribers organised by the American novelist Edith Wharton, although ultimately Sargent, a fellow American and friend, waived his fee. When it was completed James pronounced the portrait to be ‘a living breathing likeness and a masterpiece of painting’.

So that’s it. We’ve got canvas, brush, medium, pigments, layers, methods, and steps. While I don’t think I could paint an exact replica and sell it to a museum as an original Sargent, I do feel like I feel like we’ve got a handle on this. …Except for just one thing…. 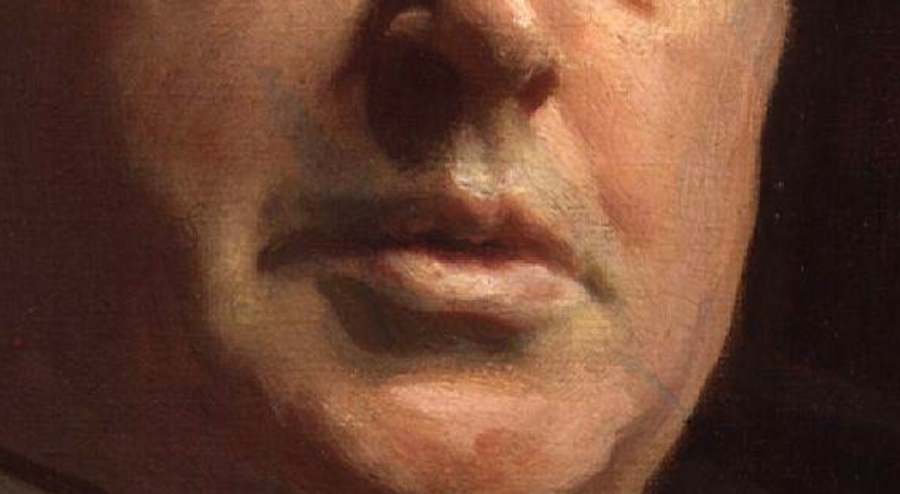 What the heck is that diagonal blue stripe across Henry James’ face?!? Sargent gave the illusion of being loose so that his work appeared fresh, and though his brushwork in this painting is bold, I’d never call him sloppy. How did that blue get there, and why did he leave it? I’m completely baffled. Thoughts anyone?