[vc_row type=”in_container” full_screen_row_position=”middle” scene_position=”center” text_color=”dark” text_align=”left” overlay_strength=”0.3″][vc_column column_padding=”no-extra-padding” column_padding_position=”all” background_color_opacity=”1″ background_hover_color_opacity=”1″ column_shadow=”none” width=”1/1″ tablet_text_alignment=”default” phone_text_alignment=”default” column_border_width=”none” column_border_style=”solid”][image_with_animation image_url=”8775″ alignment=”” animation=”None” box_shadow=”none” max_width=”100%”][vc_column_text]Preparing for my Unconventional Portraits class, I found this post on WideWalls: a top 10 list of the most influential living – or barely dead – famous portrait artists. You don’t have to like them, but you should know about them. I’m posting my personal thoughts about each of these artists at the end of this email. 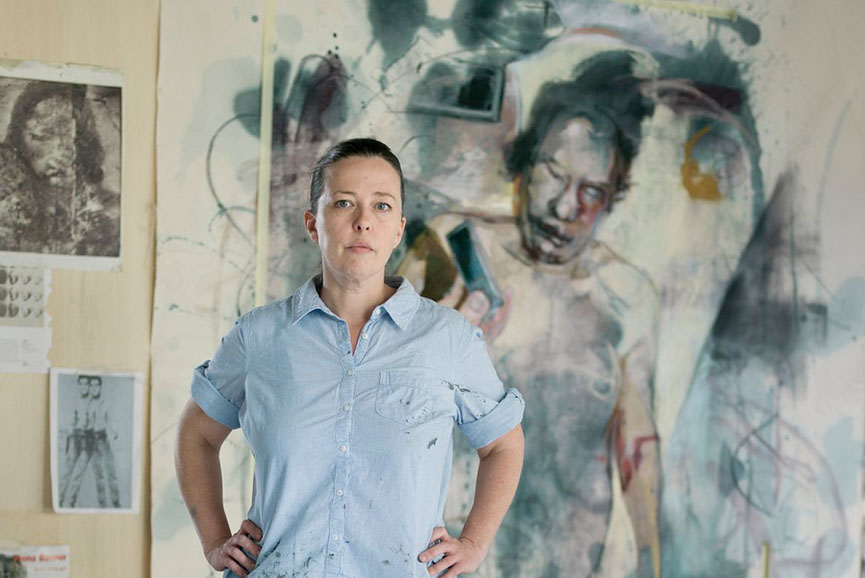 A part of Charles Saatchi’s Young British Artists group, Jenny Saville made her name in art by using haunting portraits of flawed, almost grotesque naked human body in all its glory and flesh. Her paintings challenged beauty in unprecedented ways and presented stunned viewers with new ideas of the aesthetics, ones that breathe exaggeration, mutilation, even violence, as inevitable parts of our reality. Lately, however, Jenny Saville embraced more beautiful topics and scenery for her portraiture, as her nudes of female figures and sometimes children became more sensuous and less ironic, although the artist is in no way passing judgment and it still committed to fighting the objectifying of women in paintings made by male artists. 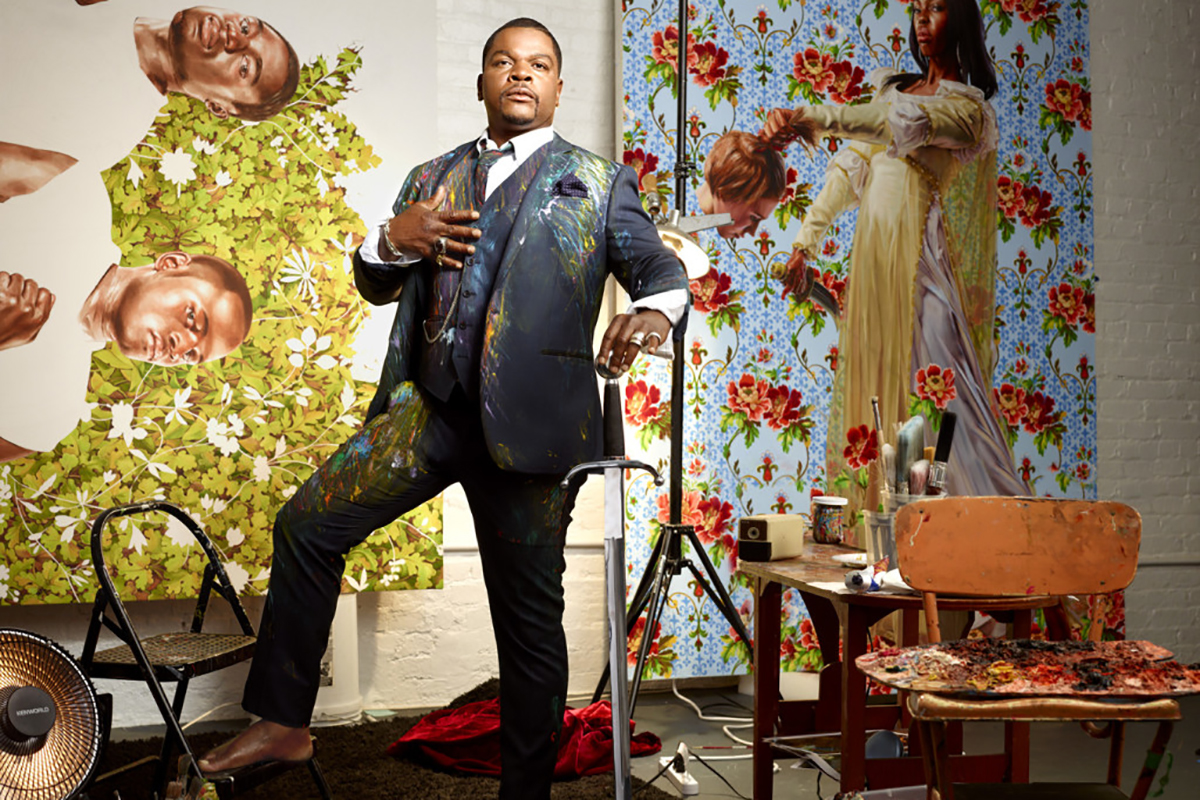 If there’s a famous portrait artist who successfully mixed traditional paintings with contemporary visions and topics, it has to be Kehinde Wiley. The American painter creates canvases inspired by Old Masters like Rubens and Jacques-Louis David, except his models are young black men who pose in front of colourful patterns – and not just any patterns, but those that refer to textiles and decorative motifs of different cultures, such as Judaica paper cutouts and Martha Stewart’s interiors. Kehinde Wiley’s art calls out the issues surrounding racial identity and the widespread stereotypes concerning African-Americans around the planet, as individuals and group. His ongoing series of works entitled The World Stage sees models from a variety of urban settings painted in a glorious, impeccable manner. 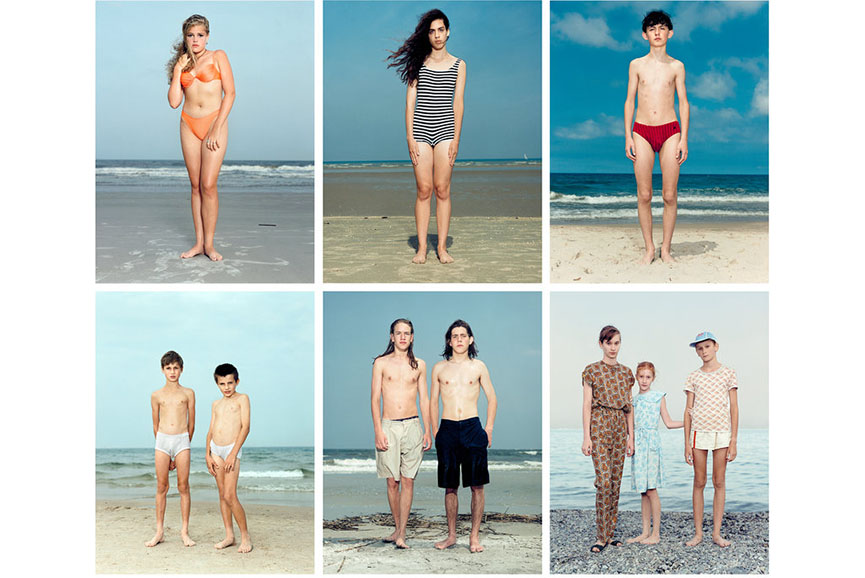 A video maker and photographer form The Netherlands, Rineke Dijkstra is known for her comprehensive body of portrait photography she’s been creating since the early 1990s. These large-scale color photos are of young, typically adolescent subjects based on 17th century Dutch painting in both their scale and aesthetics. In particular, her Beaches series, taken between 1992 and 1996, she photographed adolescents in their bathing suits on beaches everywhere, and it was the beginning of an extraordinary journey. Rineke Dijkstra develops a special kind of relationship with her subjects, getting them to unveil hidden parts of their personalities by making them comfortable in front of her camera. Her work is often considered to be a contemporary take on the documentary vision of German photographer August Sander. 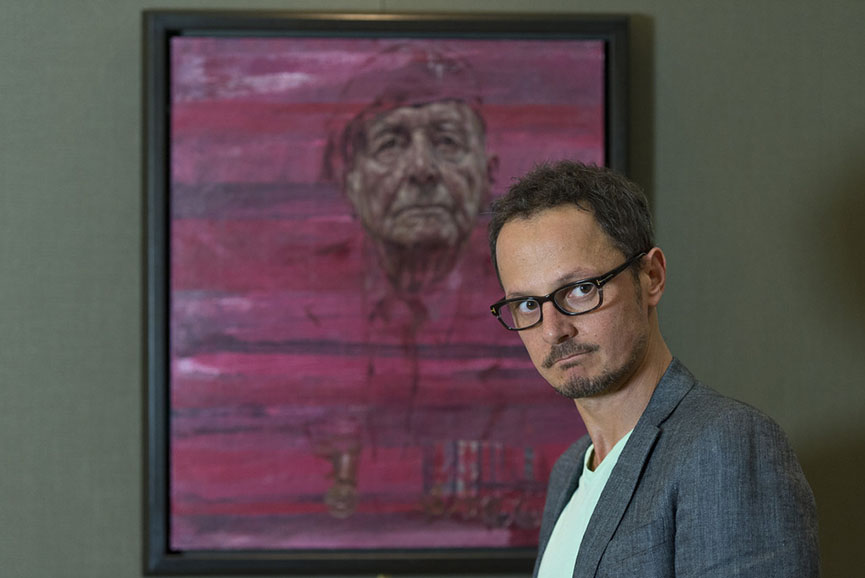 Jonathan Yeo – A Painter of Celebrities

When it comes to Jonathan Yeo, his art is peculiar in many ways. Firstly, he paints celebrities, politicians and other influential figures of our time, in the age of digital photography. Secondly, they are not just plain paint-on-canvas kind of artworks; rather, he employs cut-out imagery from pornographic magazines in order to make realistic collage portraits. He rose to prominence after creating a collage of George W. Bush made entirely out of such pictures (fun fact: he was alledgedly persuaded to do so by Banksy), and has been one of the most popular and famous portrait artists among the famous ever since. Much like his aforementioned colleague Jenny Saville, Jonathan Yeo often depicts the concepts of plastic and cosmetic surgery as one of still orthodox topics in our society. 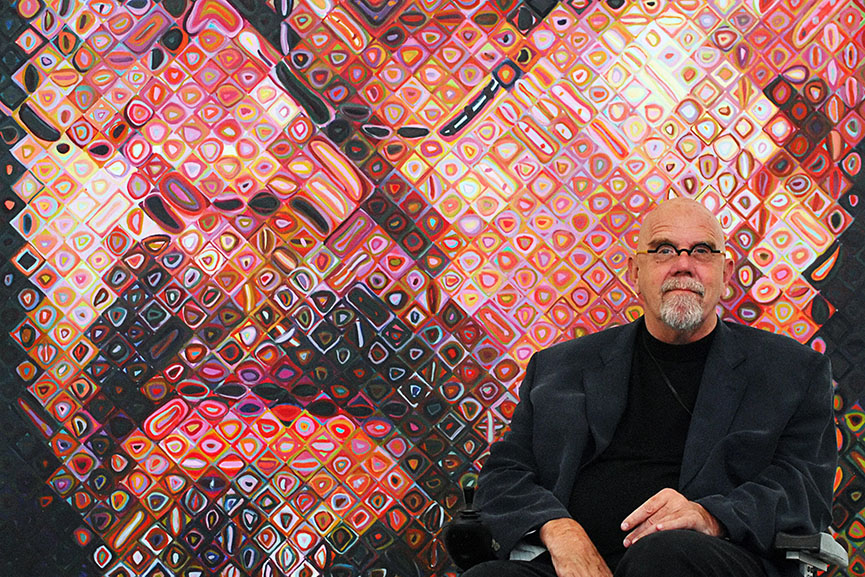 You know we’re talking about a legend here if we say that Chuck Close reinvented painting and set new standards in portraiture in general. From afar, his artworks might look like regular depictions of human face, but getting up close we find out that they are composed of individual color squares or photos, carefully placed to make a bigger picture. These paintings hold another value, as Chuck Close suffers from an inability to recognize faces, and since he’s been paralyzed in 1988 following a rare spinal artery collapse, he’s been painting from a wheelchair, using a brush-holding device strapped to his forearm and wrist. Recently, he’s also been working with, printmaking and wall-size tapestry based on Polaroids, some of which depict fellow artists like Roy Lichtenstein and Lucas Samaras. 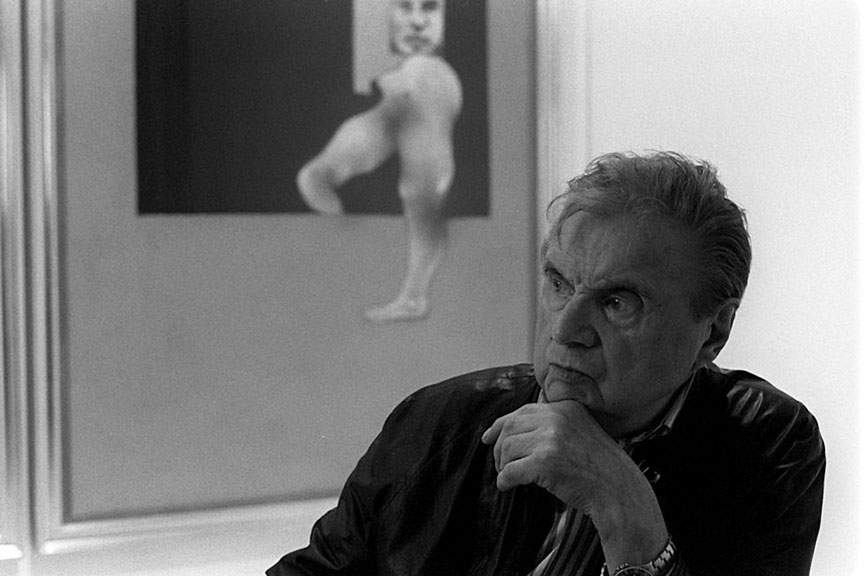 Francis Bacon – A Portraitist of Despair

“I feel ever so strongly that an artist must be nourished by his passions and his despairs. These things alter an artist whether for the good or the better or the worse. It must alter him. The feelings of desperation and unhappiness are more useful to an artist than the feeling of contentment, because desperation and unhappiness stretch your whole sensibility.” These are the words of Francis Baconthat perhaps best describe the crude, distorted, tormented portraits and self portraits he donned to the world during a fruitful, 60-year-old artistic career. Francis Bacon too was inspired by the traditionally of Old Masters, even though this is perhaps not immediately clear in his unique approach to figuration – take one of his most famous series, Screaming Popes, which was based on Diego Velàsquez’s Portrait of Pope Innocent Xfrom c. 1650. 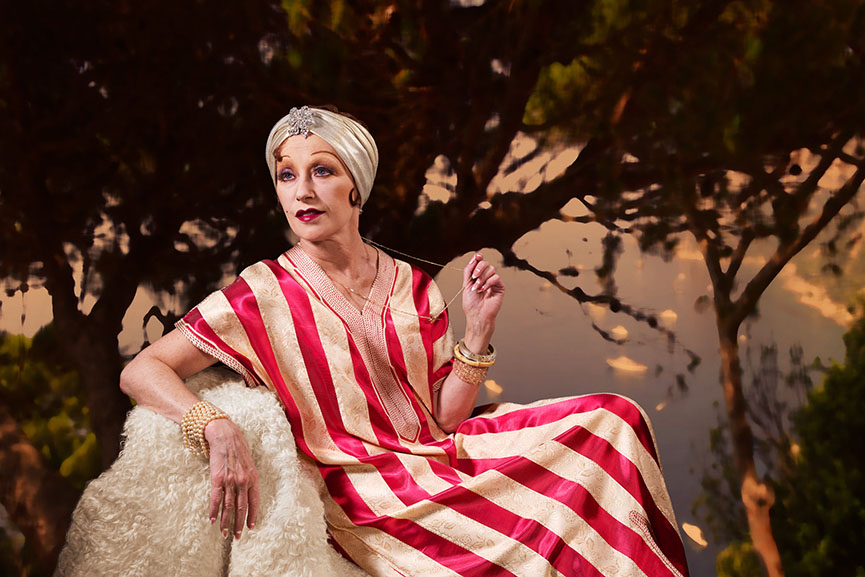 Her own model, photographer, make up artist and costume designer, Cindy Sherman created her own stories and worlds, turning the clichés of the 20th century upside down. Her incredible, complete visual transformations are all well documented in her ever-lasting series of self-portraits examining a woman’s role in modern-day society and the way she’s been oppressed and misrepresented. To date, her most famous body of work surely is Untitled Film Stills, taken between 1977 and 1980, in which the photographer recreates imaginary movie scenes and calls out stereotypes of the female lead. One of the most famous portrait artists and the most successful female creative out there, Cindy Sherman continues to reinvent herself and the concepts of self-image even today. 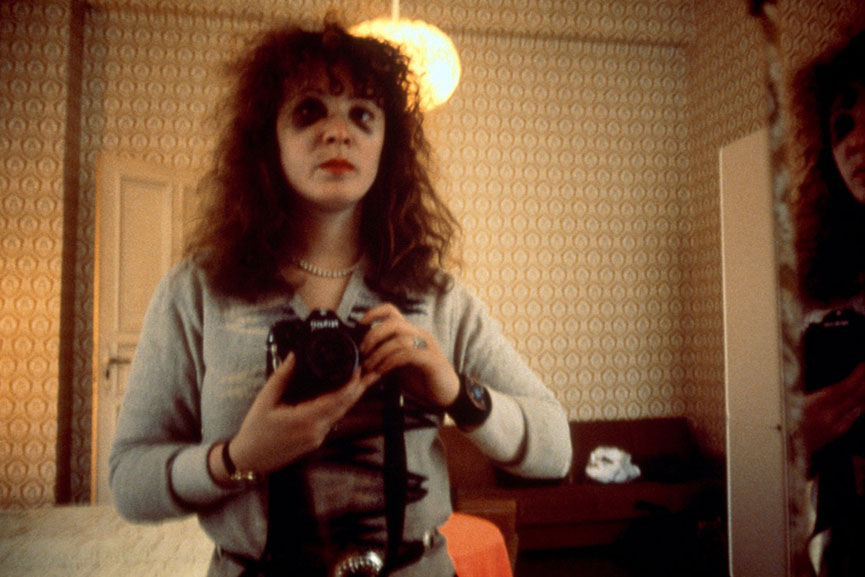 Nan Goldin – Portraits of the Underground

Some thirty-three years ago, Nan Goldin began working on her acclaimed photographic series The Ballad of Sexual Dependency, a raw, bold portrayal of friends, lovers, acquaintances and herself, living in the hidden layers of Lower East Side. Universal yet deeply personal, more than 700 of these images reveal shocking truths through a poignant kind of visual poetry, as immediate and direct as it could possibly be. Nan Goldin’s is a testimony to drugs, sex and ravaged youth in a turbulent decade, which is in part an autobiography, a visual diary that came to predate today’s obsession with the documentation of own life using smartphones. A captivating storyteller, she employed her camera to capture the lost innocence of an entire generation, to which we can still relate to this day. 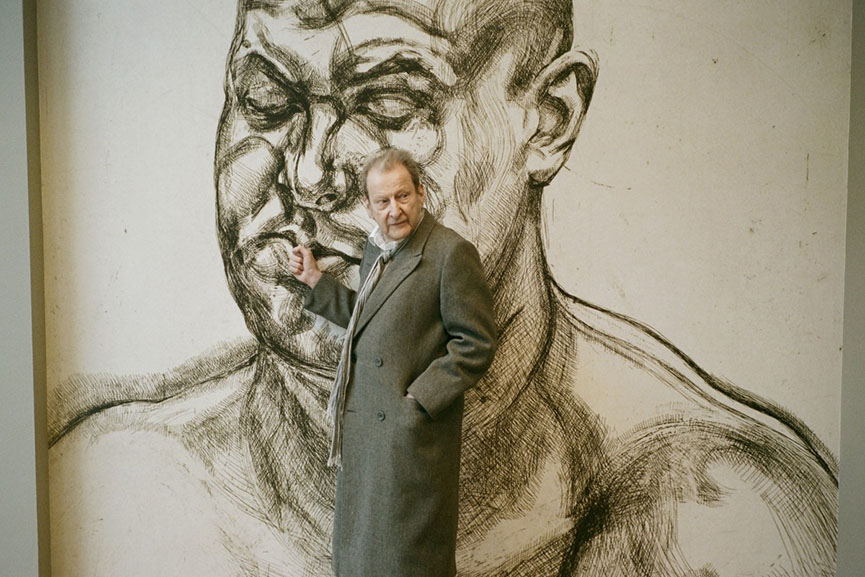 Using his unflinching observations of anatomy and psychology, Lucian Freud only painted people who were close to him – friends, family members, wives, misteresses and himself. For over six decades, his recognizable style remained unchanged, based on an intense relationship he had with his usually nude models which came as a result of notoriously long sitting sessions (perhaps he inherited the love of a psychoanalytic practice from his grandfather, Sigmund Freud). One of the most prominent figures of figurative realism in the UK and beyond, Lucian Freud managed to get away from avant-garde influences of Pop art and Conceptual art, sticking to being conventional, yet strikingly meticulous and consistent. His self-portraits are also numerous, as he obsessively painted himself until his last breath. 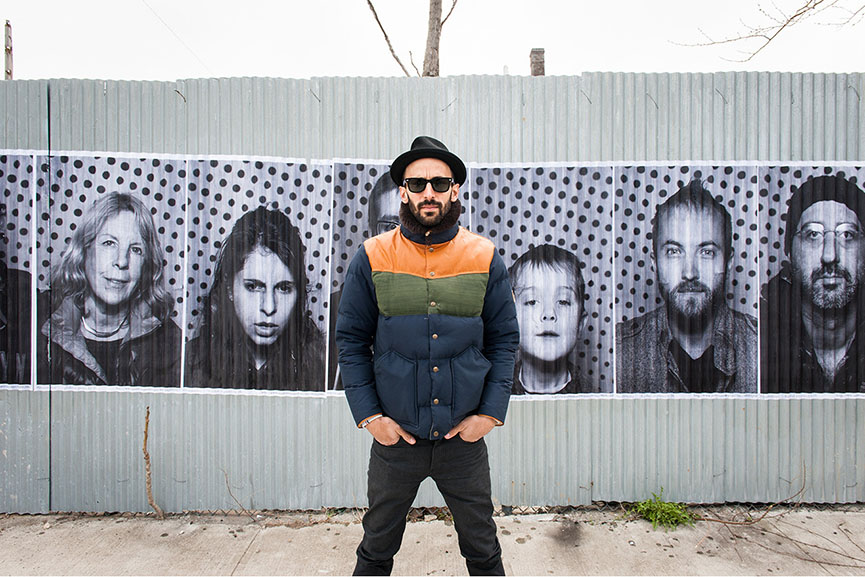 In the manner of a proper graffiti artist and photographer, JR places his enormous paste-ups on buildings, houses, streets and other urban elements in order to raise social awareness. His artwork can be found almost everywhere, as part of what he likes the call “the largest art gallery in the world”, and because of the uniqueness of his ideas and working methods, JR is a success as big as his projects. From images uniting the Israelis and the Palestinians located on each side of the Separation Barrier, to Women Are Heroes which highlight the plight of women in conflicts and the famous Inside Out Project that involves portraits of members of different communities, all of these initiatives have been highly influential and continue to gain many followers and admirers.