Preparing for my Unconventional Portraits class this Friday night, I asked Google to show me famous portrait painters. I saw this:

In a line of 27 portrait painters, 24 are white men. The exceptions are two black people, and two women. One person in the line is both black, and a woman: Amy Sherald. That shining face went through a lot of ceilings to win the top of a Google search. I suspect she’s top of the pile in part because of her recent portrait of the former first lady in all her black fabulousness, Michelle Obama. Not coincidently, I suspect Kehinde won his 1st place in part because of his portrait of former first gentleman, Barack Obama. [image_with_animation image_url=”8745″ alignment=”” animation=”None” box_shadow=”none” max_width=”100%”] Former first lady Michelle Obama and artist Amy Sherald stand next to Obama’s portrait at the Smithsonian National Portrait Gallery. (Matt McClain/The Washington Post)

This portrait is thrilling to me for forward moving politics, and a great choice by Michelle Obama. As for the artistic choices, I feel a disappointment. The portrait prominently features those gorgeous arms the former first lady is famous for, places her atop an accomplished mountain shape of a dress, and carries a clean minimal look that lives in the present, but in neither the face, nor the palette, can I feel the dynamism of the sitter. The smooth, detailed, grey pencil-on-paper quality of the face misreads as naivete in the rendering. As for the grey, according to the New Yorker, “the lack of brown in the skin feels first like a loss, and then like a real gain” because it removes the brown of race. But it’s not the brown I miss, it’s the strength and character. This is one of the strongest and most positively graceful figures alive, and she looks like she’s been copied from a magazine cover by a young teenager with a pencil.

And I don’t mean to rant here, really I don’t and this sentence takes my post into the ugly zone for writing about artists I essentially admire, but when I think of Michelle Obama, never ever ever do I think of cold, weak, passive, pretty, baby light blue. Ever at all ever. 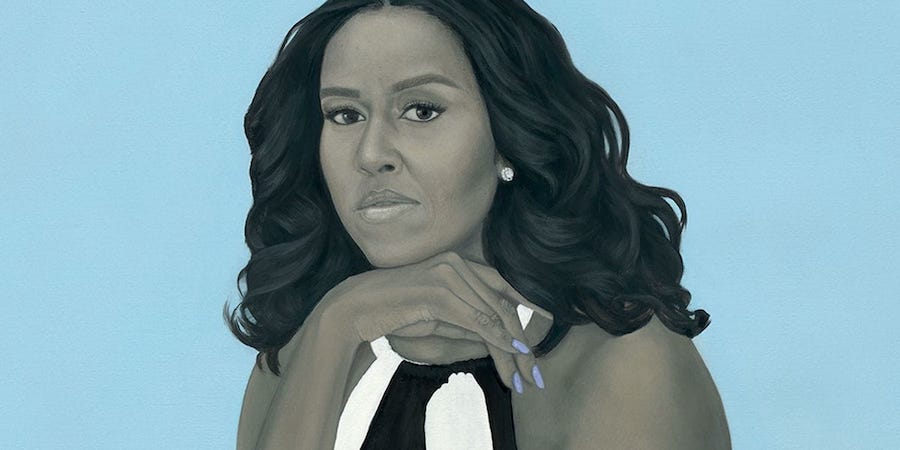 The size of the canvas and the clean triangular shape of the composition represents clearly this is an important figure, but I find myself disappointed. Where is my hero? She is not in this painting. I’ve seen other works by Amy Sherald in different contexts and I enjoyed them, so to stop being such a poop I want to revisit some other works by this artist. Clearly I am more protective of Michelle Obama than I am of Amy Sherald. Jen Graves, the former and very much missed art critic at the Stranger said “I approach every work of art as if the artist was onto something.” Perhaps some context will help me. 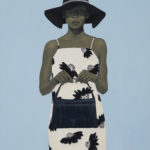 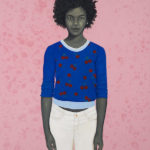 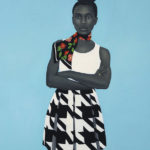 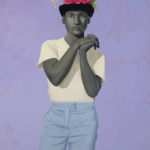 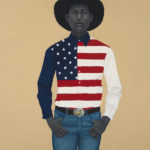 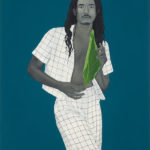 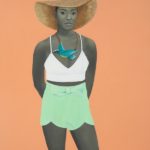 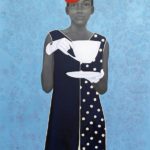 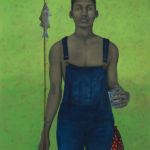 ” load_in_animation=”none Freed from personal connection to the subjects, I can return to enjoying the style of these works. They are bold and strong and colorful and clear. They are minimal, and unlike Michelle Obama’s portrait, highly symbolic. Consistently, each painting places a grey skinned subject on a single colored background. The grey is not integrated with the background as it would be in a traditional portrait (this is most noticeable for me in the green portrait of the Boy with the Big Fish, in which his grey skin takes on an especially gross color in response to the green), but stays perfectly consistent through the series, so the changing background color pushes and vibrates and in some cases overrides the skin of the model. Rather than each image standing alone, rather than each painting representing each person as they interact with space and place and time, the series represents an ever-growing group of people. While each painting appears to be a study of identity, the individual is less important than the style, so the series of works becomes the voice, and absent context of backgrounds, when viewed as a group the context re-emerges. It’s then that both the subject choices, and the fresh and clean color choices make more sense. Identity cleansed and re-described. The figures are placed in same scenarios, blank, so they are stripped clean, cleansed of context. Interesting how similar the relationship of figure to dominant background, size (most paintings are 54″ tall) and placement, and photo-loyal application is to Kehinde Wiley‘s format.

I don’t know if this is true, and I hesitate to speak about race with the authority of a white person, but I do wonder about the influence of race in this style. Both Kehinde Wiley’s and Amy Sherald’s are a very polite and tidy series of paintings.Pride is shown in the size and directness of painting, but they relay no anger, no dirt, and in both the figures are cleansed of context, presented fresh and clean and in-the-now. Michelle Obama was known for carrying herself with an impressive amount of well spoken positivity and grace, and these paintings are similar. They don’t use the apparent casualness in the style presented by european men, but rather take a higher ground, more clean, positive and more unified, and they make it their own.