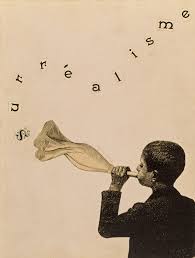 He couldn’t draw or paint. He didn’t consider himself an artist, instead he called himself a “maker” or “designer.” Living in New York City in the depression, Cornell became a collector of small objects and photographs, things he found on his walks through the city. One day in 1931, Cornell visited Julian Levy as he prepared photographs by Alfred Stieglitz for show. Levy was just about to open the Julien Levy Gallery, and Cornell watched as Levy unpacked new surrealist collages by Max Ernst. This sparked Cornell to go home and make his own collages, using the photographs he’d been collecting. He brought the collages back to Levy, and his work debued along with the surrealists from Paris: Max Ernst, Man Ray, and Salvador Dali in the 1932 exhibition Surréalisme at the Julien Levy Gallery, the first Surrealist exhibit in America. One of Cornell’s first collages ended up being the show postcard. 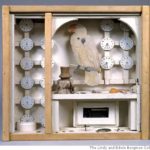 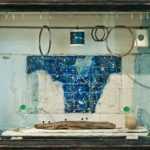 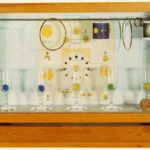