I knew the first three names (V-Notes on the way), and thank you to Suzanne Walker for repeatedly saying the name “Wojnarowicz” in her recent WTF Art History lecture, but I didn’t know the 4th painter. I had to look him up. Lawrence Carroll: not dead yet! He is in his mid 60’s, living outside Los Angeles. The NYTimes described his paintings as:

“…poetically gloomy, dirty white, boxy, irregular paintings that verge on sculpture. Glued, patched, stapled and otherwise cobbled together, they look as if they had been abandoned for years in some funky basement.” 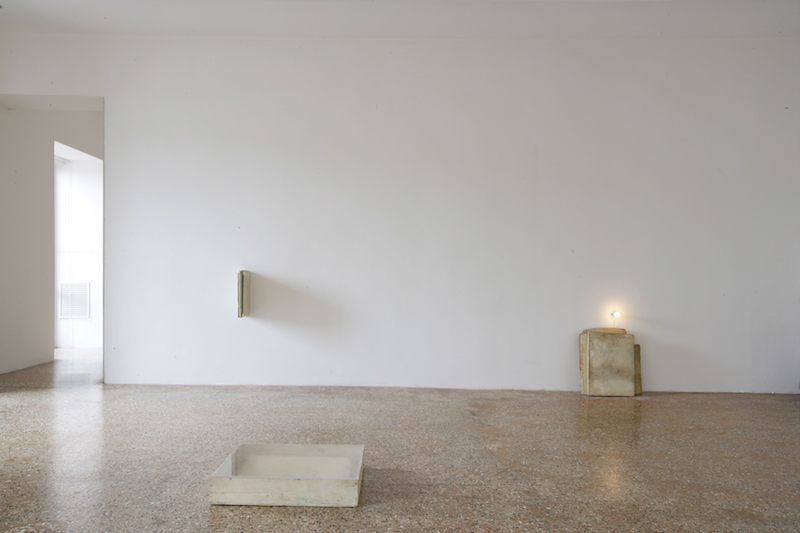 In this, I find myself staring at the artwork, and at the wall – the part that is supposedly nothing. The wall looks like it has been painted with that cheap flat paint, the kind that covers the surface thinly like milk paint, like a velatura layer, and if you touch it sucks all the moisture out of your hand. It feels like chalk, and leaves a soft mark in the white. I wonder what color it is. I know it’s white, clearly, but there’s pigment in white. I can see reflections off the polished brown pebble floor. Does it have a bit of black? I think I see a hint of magenta there – is that my screen? Maybe a drop of black, maybe a drop of magenta. I love paint. Have I ever told you how much I love paint? I love paint. 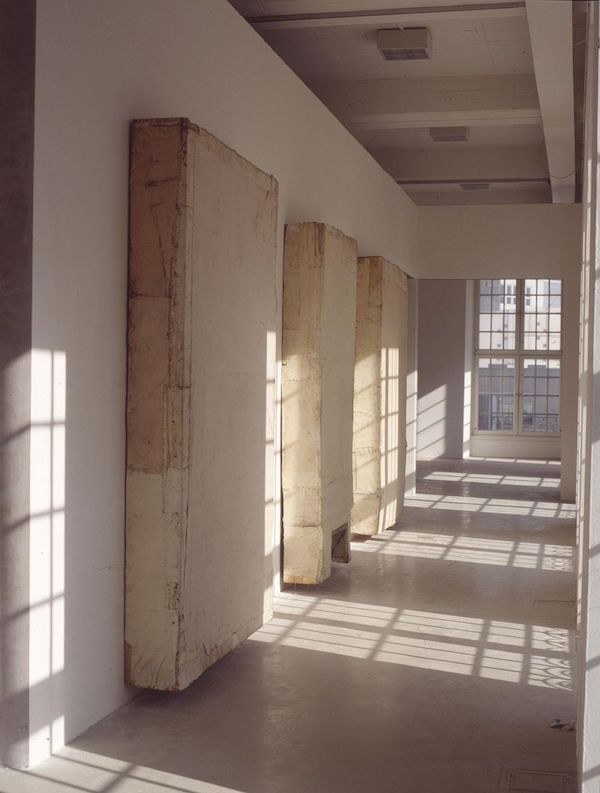 I offer uncommon interest in looking at a painted wall, but that’s part of how these paintings by Carroll I find so interesting. Realism removed from the thinkery filler of a Painted Picture, forms removed from the illusion of weight and space, the paintings themselves become a sculptural surface, not entirely dissimilar to a wall. They have been physically designed, built, touched, and lived with. They reflect light, mirror architecture, show dirt, direct the movement of our bodies around them, set mood and proportional size, convey age, and suggest time. Ignoring art markets and sales that cost and prop a painting in Justifications, letting them be Things On the Wall, tactile deliveries of concepts and ideas, these paintings are full of nothing, full of emptiness.

Jen Graves, then the art critic at the Stranger, once told my painting class how she looked skeptically and at first impatiently at a white painting, to discover that after a few minutes, the blankness of the paint, the subtle details within the white-on-white had slowed her thoughts down, brought her to quiet. If everything is removed from a painting, what is left? (sound of one hand clapping)

Lawrence Carroll in his studio

In the 1990’s Carroll moved his paintings off the wall and into more directly sculptural forms. They remind me of the sculptures by Seattle artist Whiting Tennis. From Wikipedia: “In 2002 Carroll created an installation in Munich Germany for a project called “getting lost” Raum der Stille, in the Karmelitenkirche (Munich), Promenadeplatz where he included one of his first works that he would later coin the name “table paintings”. The table paintings start with the table (structure) which is never predetermined and is made intuitively. After the table is made Carroll then starts to create the structure that grows from the table using pieces of wood from the artist studio. Carroll thinks of the structure as drawing, which can continually be altered and added to or subtracted from (erasure). The form which is connected to the table by screws is often disconnected and moved around until another form appears that interest the artist, and at this point the structure is reconnected to the table. This process goes on for months. Once a form is found the artist often then closes one or more of the forms using newspaper and glue or cardboard. All during this process the structure and the forms are painted. More often than not the work is then completely taken apart and reassembled on the table to begin again until a form (gesture) is found that could have never been predicted. Due to this lengthy process few of these table paintings ever reach completion.”[/vc_column_text][vc_gallery type=”image_grid” images=”8253,8254,8255″ layout=”3″ gallery_style=”1″ load_in_animation=”none”][vc_column_text]If you’re interested in exploring more unconventional paintings like Lawrence Carroll’s, consider signing up for Paul D. McKee’s Unconventional Painting workshop March 3 & 4. Maybe it’ll be a change of pace.[/vc_column_text][/vc_column][/vc_row]