My dreams are in full color. Not just wishy-washy pastels, I mean all of the everything. Yellow ochre, bold reds, deep inky blues, textured and shadowed greens. The colors are as important in my dreams as they are in my paintings. They tell half of the story.

Do Androids Dream of Electric Sheep?
Do Doodlers Dream of Henry Moore Sheep? 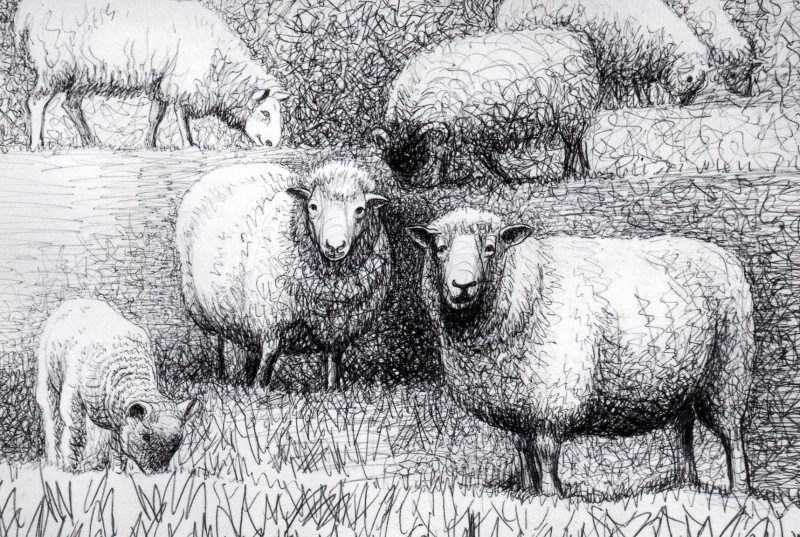 Sometimes I wonder if my dreams are different from other people’s. I’m a practiced painter. I communicate in colors, shapes, and metaphors. Do other people? Do non painters dream the same, but struggle to pay attention to, or interpret their dreams? If people have trouble forming ideas for a drawing or a painting, would they have trouble dreaming? Where do these articulated ideas come from, and how are they built within the mind? How would my dreams be different if I was a mathematician? Since my dreams are 99% visual, I assumed they would be for everyone, but maybe recording engineers dream in sound, maybe physicist dream about the spaces in between things, movement and time.

It seems like the most common problem for beginning painters and anyone trying to describe the visual elements of a dream is that the quality of clear expressible visual information is not as present as it would seem. Just like in real life, a person can say “toothpaste tube” but not be able to fully render every wrinkle and bit of crunched text. Most of us don’t have photographic memories. Is memory related to the ability to dream in detail, and to render? Without photographic memories, before I study shapes by drawing them, in my dreams and in real life elements are unclear, they morph, they overlap, they include some sort of non-visual narrative, or when it comes right down to it I’m not really all that clear about the precise shape they take. I just say “toothpaste tube,” see some white with a ribbed cap, and move on. All these half forms, and morphing forms, simultaneous forms, they are very complicated to explain on a flat fixed surface.

I have a photographic color memory. Are my dreams different? Would they be different if I also had a memory for shapes – including complete and comprehensive minute details? There certainly are a lot of holes in my dreams, and they tend to be similar to the gaps that appear when I attempt to draw without a reference. (This is precisely the reason I need a reference – because I don’t already know what it looks like, no matter how simple a form it is.) Is this related?

One of the most common questions about dreams is whether they’re in black and white, or in color. Who started that question? Of all the questions you could ask, this is the dream question? And we’re told people dream in black and white, or even soft pastels. And now there’s a shift in those night time exit poles: supposedly most people used to dream in black and white, whereas now most dream in color, and They say it’s because of movies. Is my unconscious really directed by Hollywood? Frightening thought. Since my dreams as a child weren’t in an amber 70’s tinge, my recent dreams aren’t in HD saturated reds and greens, and the audio didn’t improve, I’m not going to credit Hollywood for my personal productions.

In a recently published study (one survey conducted in 1993; the follow-up in 2009), researchers found that about 80 percent of participants younger than 30 years old dreamed in color. But by 60 years old, only about 20 percent said they did. (How often participants dreamed in color increased from 1993 to 2009— but only for people in their 20s, 30s and 40s.) The researchers speculated that color TV might play a role in the generational difference.

Childhood exposure to black-and-white television seems to be the common denominator. A study published this year, for example, found that people 25 and younger say they almost never dream in black and white. But people over 55 who grew up with little access to color television reported dreaming in black and white about a quarter of the time. Over all, 12 percent of people dream entirely in black and white.

Go back a half-century, and television’s impact on our closed-eye experiences becomes even clearer. In the 1940s, studies showed that three-quarters of Americans, including college students, reported “rarely” or “never” seeing any color in their dreams. Now, those numbers are reversed.