Edited from the original post by Lindsey Rae Gjording
http://vanguardseattle.com/2014/05/14/artists-way-whiting-tennis/

Although always evolving, his process has been pared to what is proven to work best, a combination of drawing and more processed pieces that follow after that. He explains:

“It starts out of drawings. I draw on paper with crayon or pencil wherever I am at, and those drawings take me to the next painting, or sculpture, or a bigger drawing.”

“It’s simple, I draw, I try to be as automatic as possible, not to have an intention when I start putting the pencil down. I just start moving it. I am trying to do something different than last time and not just go on full auto-pilot, so there is an intention but it’s not locked in the front of my head. I try not to repeat myself; I let the line happen. Automatic drawing, like a Ouija board, you let your fingers push the pencil, and you watch it go, and that is the source.”

“From a hundred of those drawings I might get four or five that look like something and whether it’s purely abstract, or something that’s abstract but has something going on that I don’t understand, or if I see a face or a body part or an animal head, then that’s what I work with. Sometimes I religiously stick to the drawing; I actually grid it up, and sometimes I augment it, fatten it, make it taller. I can usually tell when I look at it if I will paint it. It depends. I make acrylic paintings, acrylic collage paintings. I make oil paintings. I make sculptures that are relief. I make sculptures that are all three-dimensional.” [image_with_animation image_url=”4023″ alignment=”” animation=”None “I’m a little bit anxious. I can feel when I’m on, when I’m tracking. And as soon as I feel like I’m starting to have an intention, like I see an eyelid or a nose or a finger, I don’t want the conscious to slip in and start representing things. It’s like golf. You have to be highly trained and then when you actually swing the driver you have to completely release and let all your muscles swing, using the rehearsals you’ve had. If your brain comes in in the middle of the swing, to do a correction, then you’ll screw it up. It’s game over. It’s all about making it happen, so it comes off in a jam. If I am trying to put two drawings together, and combine the elements, then you have to use your art school head, formal skills. And I have formal skills from school, basics, but I don’t rely on those as much.”“Aardvark” by Whiting Tennis

“I draw in the morning, at the coffee shop, and I take a figure life drawing class on Mondays. Last time I went there was a male model, and I don’t respond as well to a male model. it’s an aesthetic thing, not a sexual thing. Angular, blocky. He was a specimen, totally gorgeous, perfect body, but I spent the whole time drawing in my sketchbook, and I got a good night out of it. I go because there are a lot of people drawing and a lot of momentum in the room. I will draw all the short poses in the beginning, but once they get into the longer poses, once the model is sitting down and gravity is not taking place, the structural element of two legs holding the figure up, then I am not interested anymore, so I do my own thing.” 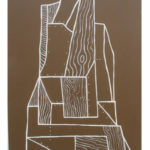 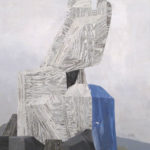 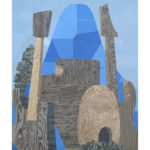 This idea extends to his sculptures, many of which are reliefs. For those not clear on the distinction, relief sculpture is any sculpture that is wall mounted and has topography built into the surface of it. It adheres to a wall and is a couple inches thick, flat at the back with forms emerging at front. Tennis is also in the process of finishing a large piece of public art commissioned by Vulcan, which will be installed on Lake Union. The sculptures, very much like his paintings, are mainly made of wood and use a lot of layered patchwork style in their build. Saying I viewed them as architectural, he was quick to explain they are not created with that in mind, but something far more interesting:

“I see a shape but it’s not identified yet. It’s like a poem or a song or a metaphor where you launch into it and make it and it has the ingredients of what it is and you’re discovering it along the way, and you might never discover all that is in there.”

“I’m not intentionally referencing architecture. When you’re talking about building materials like wood and stone and concrete, that stuff—for the last fifteen years I’ve been making sculptures and paintings that look like they’re made out of building materials. It’s a really basic metaphor: You have the figure, as a body, or an animal as a body, which can be rendered by the same tools and materials you could build a shelter with. It’s not architecture; it’s much lower-brow building. It’s like you’re making the connection between a two-by-four and a bone. You have the body and the inside of the body, the bones and whatnot, and in a building you have two-by-fours and you cover them. The structural materials are an obvious connection; this is a house and shed and a figure at the same time. I don’t think of the philosophical angle of it, but all of my figures do. For some reason I am thinking in terms of wood.” [image_with_animation image_url=”4022″ alignment=”” animation=”None “When I see something that I really want to make, it’s a combination of questions, and I recognize something in it, and during the process—it could be a year later—I will see a tie-in to what I was going through, and it’s not a Freudian thing, but it’s a totem. It’s a thing that’s passed down, that’s been collected. We have a cultural accumulation of these symbols, and I like that word because they’re images that have ideas attached to them, that are cloaked in mystery. They have power, and they don’t always self-expose. They’re just in there. So you have a painting that has a power and you don’t recognize all that is in there; it slowly comes out. So with structural things, you are already in that world of mystery—ambiguous, what is it?—whereas if you do something really literal, then you have to really render the figure, and be able to compose a scene that has enough psychological content that it remains interesting besides the fact that it’s just beautiful.” [image_with_animation image_url=”4019″ alignment=”” animation=”None