Nocturne in Black and Gold – The Falling Rocket

I’ve long admired Whistler’s Nocturnes for their spare elegance, and subtle nods to Hiroshige’s woodblock prints. What I didn’t know is that it bankrupted poor Whistler, and was the subject of lawsuit controversy as unfortunate as modern daytime television. All that, and it was simply a matter of taste.

Whistler believed in “art for art’s sake.” Contrary to the predominant Victorian loquaciousness, he believed a painting need not be beleaguered by narrative, meaning, or moralities. To Whistler, a painting needed only a quality of emotion produced from tone and color. A painting needed only to be beautiful. Further, he believed an elegant painting should have the lightest application of paint and the least amount of brush work, a new style later called Japonisme, influenced by Japanese art and fashion. In “Nocturne in Black and Gold – The Falling Rocket” Whistler’s work was so light and implied that to the art critic John Ruskin, it looked completely without finish, or craft. The thin transparent washes, barely covering the weave of the linen, and his flecks of paint, so practiced to look effortless, was so grossly misunderstood by Ruskin that it effectively ruined Whistler’s career as a painter.

Detail of Nocturne in Black and Gold – The Falling Rocket
Excerpts from Wikipedia:
Whistler spent years perfecting his splatter technique. Eventually he possessed the ability to make an object or person with what appeared to be nothing more than a single flick of paint. Although Whistler’s critics denounced his technique as reckless or lacking artistic merit, it is notable that Whistler spent much of his time with meticulous details, often going so far as to view his work through mirrors to ensure that no deficiencies were overlooked.
Nocturne in Black and Gold – The Falling Rocket c. 1875 is most famously known as the inception of the lawsuit between Whistler and the art critic John Ruskin. Ruskin was not aware of the effort and theory that had gone into Nocturne in Black and Gold when he accused The Falling Rocket of being a public insult. He had denounced Whistler’s art as “absolute rubbish.” 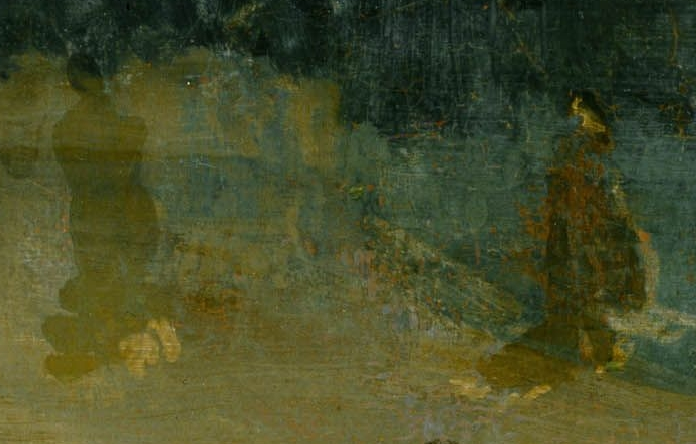 Detail of The Falling Rocket

Working against contemporary inclinations for narrative (indicative of the heavy consumption of literature), Whistler can be seen arguing for painting’s essential difference from literature within this work, as color and tone trounce hints of narrative or moral allusion. Whistler’s focus was on coloristic effects as a means of creating a particular sensation. More than that, a Nocturne is concerned with its depiction of space, seeking a particular sense of void that seems to arise only in the night time. As part of the Art for Art’s Sake movement, the artwork seeks to provide complex emotions that go beyond the technicalities of the imagery. Whistler believed that certain experiences were often best expressed by nuance and implication. These compositions were not designed to avoid the truth of a scene, but instead served as a means of reaching deeper, more hidden truths. His artistic endeavors no longer concerned themselves with physical accuracy, seeking only to capture the essence of an intangible, personal and intimate moment. Whistler has been quoted as saying:

“If the man who paints only the tree, or flower, or other surface he sees before him were an artist, the king of artists would be the photographer. It is for the artist to do something beyond this.”

In essence, The Falling Rocket is the synthesis of a fireworks scene in London, and so by no means does it aim to look like it. Like his other Nocturnes, the painting is meant to be seen as an arrangement, set to invoke particular sensations for the audience.

Affronted by The Falling Rocket, John Ruskin accused Whistler of “flinging a pot of paint in the public’s face.”  As a leading art critic of the Victorian era, Ruskin’s harsh critique of The Falling Rocket caused an uproar among owners of other Whistler works. Rapidly, it became shameful to have a Whistler piece, pushing the artist into greater financial difficulties. With his pride, finances, and the significance of his Nocturne at stake, Whistler sued Ruskin for libel in defense. In court, he asked the jury to not view it as a traditional painting, but instead as an artistic arrangement. In his explanation, he insisted that the painting was a representation of the fireworks from the Cremorne Gardens. During the trial, Sir John Holker asked, “Not a view of the Cremorne?” to which Whistler was quoted as saying, “If it were a view of Cremorne, it would certainly bring about nothing but disappointment on the part of the beholders.” However, his case was not helped when The Falling Rocket was accidentally presented to trial upside down. His explanation of the composition proved fruitless before the judge. The Ruskin vs. Whistler Trial, which took place on November 25 and 26, 1878, was disastrous for Whistler. While he did not lose, he only won a farthing. After all the court costs, he had no choice but to declare bankruptcy. Whistler was forced to pawn, sell, and mortgage everything he could get his hands on.  Whistler included a transcript of the case in his 1890 book The Gentle Art of Making Enemies.