Toilet paper is a subject wound in controversy: 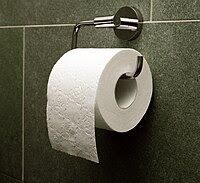 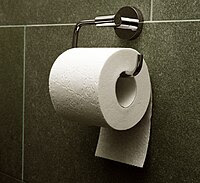 Toilet paper when used with a toilet roll holder with a horizontal axle parallel to the floor and also parallel to the wall has two possible orientations: the toilet paper may hang over (in front of) or under (behind) the roll; if perpendicular to the wall, the two orientations are right-left or near-away. The choice is largely a matter of personal preference, dictated by habit. In surveys of US consumers and of bath and kitchen specialists, 60–70 percent of respondents prefer over.

While many people consider this topic unimportant, some hold strong opinions on the matter. Advice columnist Ann Landers said that the subject was the most responded to (15,000 letters in 1986) and controversial issue in her column’s history. Defenders of either position cite advantages ranging from aesthetics, hospitality, and cleanliness to paper conservation, the ease of detaching individual squares, and compatibility with a recreational vehicle or a cat. Some writers have proposed connections to age, sex, or political philosophy, and survey evidence has shown a correlation with socioeconomic status. A generic answer is that it should hang the way the person doing the roll changing prefers.

Solutions range from compromise, to using separate dispensers or separate bathrooms entirely, or simply ignoring the issue altogether. One man advocates a plan under which his country will standardize on a single forced orientation, and at least one inventor hopes to popularize a new kind of toilet roll holder which swivels from one orientation to the other.