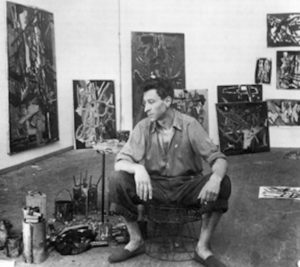 Nicolas de Staël was a French painter of Russian origin known for his use of a thick impasto and his highly abstract landscape painting. He also worked with collage, illustration and textiles.

After suffering from depression, in the wake of a disappointing meeting with a disparaging art critic on March 16, 1955 he committed suicide. He leapt to his death from his eleventh story studio terrace, in Antibes. He was 41 years old.

In the US, his name is rarely cited as an influence. The first reason for his relative absence is simply bad timing. As Eliza Rathbone explained in 1997: “The very fact that [de Staël] began to achieve fame and recognition during the same years as the New York School was establishing its reputation on native soil, made a challenging environment for the work of an artist steeped in artistic culture and traditions of France.”  The romantic image of the New York School remains powerful today. Struggling inwardly in a studio on 10th Street continues to capture the imagination of young American painters more than painting light and heat on a beach in Antibes.