R.B. Kitaj was an American artist who championed figuration in the aftermath of expressionism. Kitaj was an influential figure in the London art scene and was intimate with Lucian Freud and Francis Bacon, coining the term “London School” for this group. His art was unabashedly erudite and often accompanied with explanatory obscure texts that many critics saw as a testament to the artist’s egoism.

The art of Kitaj is characterized by his insatiable intellect and excellent draughtsmanship. The art critic Robert Hughes wrote that “[he] draws better than almost anyone else alive.” His works are preoccupied with history and attempt to make the viewer aware of the historical reality of their situation. Kitaj linked past to present with a sometimes overwhelming array of references to paintings by artists such as Motherwell, Van Gogh, Degas, Cezanna and Michelangelo and the writings of figures ranging from Frakz Kafka to mystics such as Ramon Lull and philosophers like Erasmus and Nietzsche. His travels in Europe shortly after WWII had a profound influence on his “Jewishness” and his art.

Read more about Kitaj on the original post here. Check it out.
There’s a lot of illuminating information on this page. 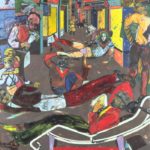 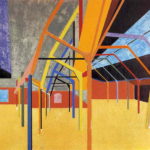 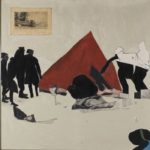 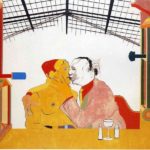 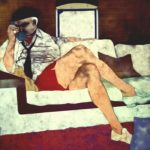 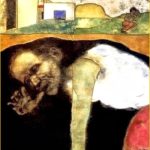 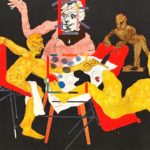 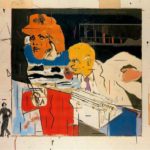 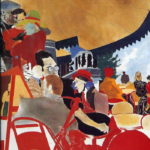 Below: 3 minute video of Kitaj interviewed in his studio, cuts off a bit at the end, but still lovely. https://youtu.be/0VpkLS1Baxo Below: 10 minute video showing still images of Kitaj’s paintings. Some great paintings, some just meh, and some are absolutely awful. It’s as if the video maker went into Kitaj’s studio and gathered up whatever was on the walls, the tables, and in the garbage bin, then displayed them all equally. Fantastic!