Richard Diebenkorn
Diebenkorn was an American painter. His early work is associated with abstract expressionism and the Bay Area Figurative Movement of the 1950s and 1960s. His later work were instrumental to his achievement of worldwide acclaim. Wikipedia
Born: April 22, 1922, Portland, OR 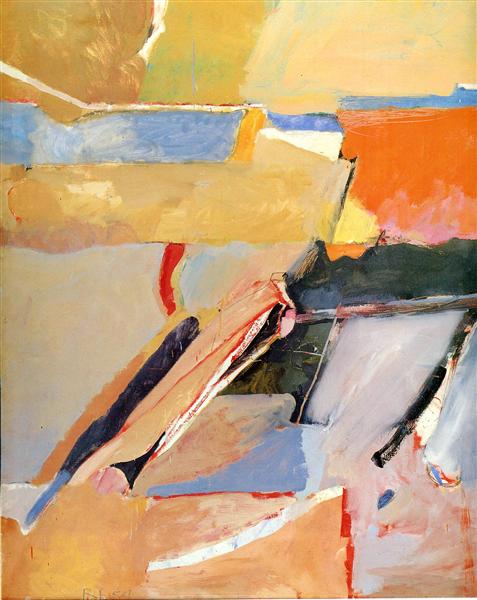 What I love about Diebenkorn is that his process of painting is not a straight line from start to finish. He starts a painting by making marks, he responds to those marks. He changes things. He considers the painting. He changes more things. He continues reacting to the painting in front of him until it feels finished, which could be a short time, or a long time. He just … talks to it. His brush strokes are loose so they appear to be informal, but his paintings are incredibly thoughtful. Each layer of paint he puts on does not obliterate the first, there are no “mistakes” he is trying to cover up, and through each layer you can see previous layers peeking through, showing us his process of making the painting. He plays with flat space (doesn’t try to give the illusion of depth), and lets paint be interesting as paint. It’s not important whether the glass on the table is perfectly shaped. The objects aren’t important. The painting is about the painting.

“I keep plastering it until it comes around to what I want, in terms of all I know and think about painting now, as well as in terms of the initial observation.”
– Richard Diebenkorn

My advice, if you want it: When you start a painting, try not to think that you are taking the steps to get to the final product. Think of painting as going for a walk. When you start the walk, you don’t know exactly where you are going or exactly what you will see. Explore, and react to what is in front of you. Stay engaged. See what happens. You might have more fun if you’re able to paint this way. You’ll see more, and as you see more, you’ll learn more and your work will improve. Painting (verb) is not a product, and it’s not a test. Whether it’s impressionism or realism or abstraction, painting is seeing, and seeing is a responsive process.

“I don’t go into the studio with the idea of ‘saying’ something. What I do is face the blank canvas and put a few arbitrary marks on it that start me on some sort of dialogue.”
– Richard Diebenkorn