Hiroshige is best known for his landscapes, such as the series The Fifty-three Stations of the Tōkaidō and The Sixty-nine Stations of the Kiso Kaidō; and for his depictions of birds and flowers. The subjects of his work were atypical of the ukiyo-e genre, whose typical focus was on beautiful women, popular actors, and other scenes of the urban pleasure districts of Japan’s Edo period (1603–1868). The popular Thirty-six Views of Mount Fuji series by Hokusai was a strong influence on Hiroshige’s choice of subject, though Hiroshige’s approach was more poetic and ambient than Hokusai’s bolder, more formal prints. (Wikipedia)

As a child, I collected the little cards with Japanese prints that came in ochazuke (breakfast rice soup sprinkles). The compositions were asymmetrical (diagonals!), the illustrations imaginative, and the colors shifted elegantly from the blunt American palette – the inks both vibrant and subtle. I loved them. I knew about Japanese artworks before I knew about the European impressionists who were so inspired by them. I knew the Japanese works so well that the impressionists seemed clumsy and heavy handed compared to the delicate craftsmanship of Japanese artists. Eventually the influence grew conduits in my mind, and I came to appreciate and enjoy both. (More on Japonisme soon.)

Below is a collection of Hiroshige prints featuring rain. The plants outside my window may be different, and my neighbors don’t wear yellow hats, but the rain looks much the same. 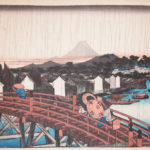 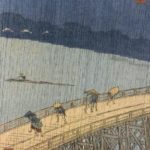 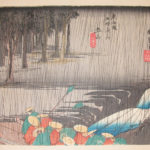 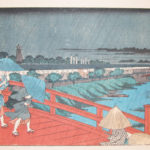 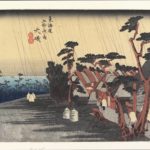 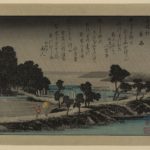 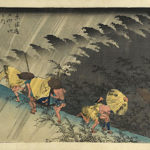 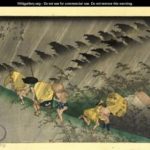 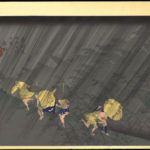 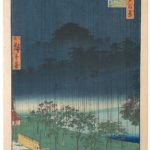 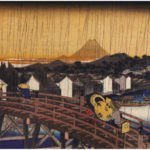 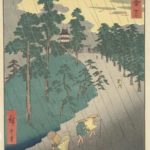 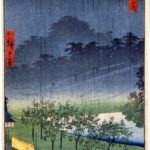 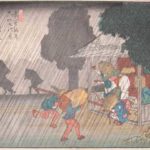 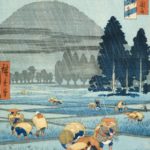 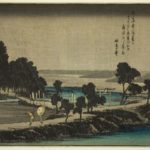 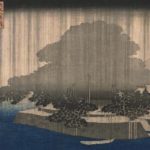