On a computer screen, the detailed cells of color in Chris Crites’ paintings look digital-perfect. In person, I’m compelled to creep closer, closer, until my breath fogs up the glass. It’s then that I can see the thousands of tiny brush strokes neatly aligned within each penciled form. He says it’s OCD. I say it’s skill and patience.

Crites’ first exposure to mug shot photographs was in the post office of his childhood hometown. There he was captivated by posted “Wanted” fliers featuring possible malcontents of the day. As his interest in history developed he became reacquainted with mug shots in the book “Death Scenes: A Homicide Detective’s Scrapbook” published in 1996 by Feral House. It was from this collection of photos from the 1930’s and 1940’s that he painted his first four mug shots in acrylic on paper bag in 1999. These paintings established his ongoing color experiment of five or less colors on brown paper bag. Seriously focusing on the subject matter of arrest photographs since 2002, Crites has developed and refined his brightly colored, limited palette style. Visiting the Washington State Archives he collects mug shot photos on his own. 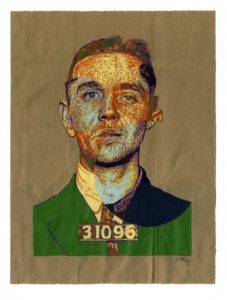 Ruthie: Your recent mug shots have a new polka-dot peek-a-boo overlap image. I’m curious how you plan the circle overlaps with the images, and why you added this dimension.

Chris: The overlapping “connections” pieces I sized in photoshop so that they would work together and then layered them. Cutting various holes in the top photo allowed me to see where the faces made interesting intersections and connections that worked together. The idea behind that was how even though we are individuals, our actions and lives effect the lives of others. 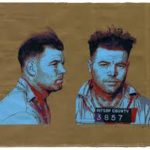 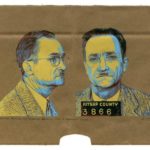 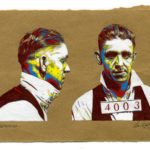 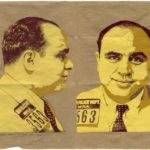 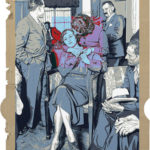 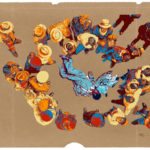 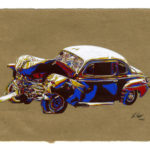 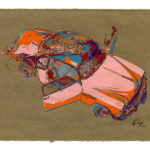 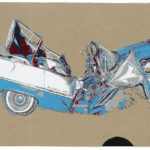 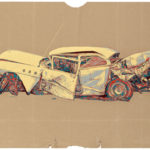 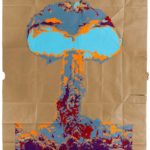 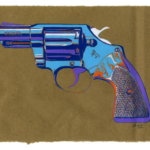 “Within this work is my ongoing experimentation with color. I enjoy taking difficult subjects and examining them in paint, looking at things in a different way as well as seeing how different color combinations affect what we are looking at.”

If you’d like to hang out with Crites visit the League this Friday for Art Walk 6-9pm, where he’ll be our special guest star. Join us! We’ll have art, and we’ll have beer.