What happens when paper is treated as a raw material, instead of a flat white rectangle? The photograph to the left is one that’s been circulating on the internet lately. This is what happens when wasps are given colored construction paper. The paper is used as fibers and pulp, not ready for pencil lines to represent an image, but ready for an entirely new form. Karen Margolis uses paper with similar ingenuity. Colored maps are cut, layered, sculpted. The space within is just as important as the material itself. Margolis is inspired by the buddhist Enso, an inked circle signifying the object, the whole, the space within and around, perfection and imperfection.

Thank you Yvonne for introducing me to Karen Margolis. 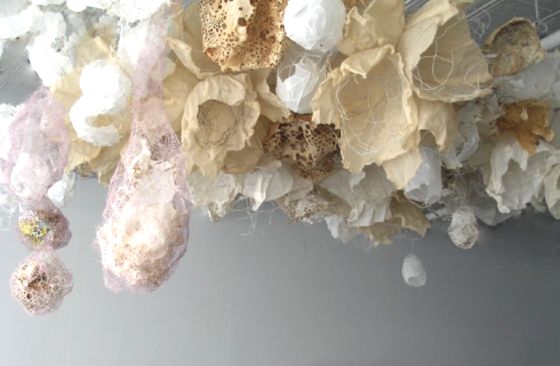 Obsessively crafted circles are the central motif to Karen Margolis’ work. The circle, sacred to many, is riddled with symbolic meaning. In Chinese gai tain cosmology, the circle is noted as the most perfect geometric shape and, accordingly, represents the heavens above the square earth. In Native American tradition, the medicine wheel is a symbol of life, perfection, and infinites. Even hip-hop super-group Wu-Tang Clan, 5 Percenters, praise the purity of the circle. “As God Cypher  Divine, all minds one, no question,” Masta Killa recites in Visionz. In hip-hop culture, the cypher refers to freestyle rap, where interrupting another man will break the cycle.   According to the 5 Percenters and their supreme mathematics, zero (or the cipher) is the completion of a circle: 360 degrees of knowledge, wisdom, and understanding. It’s easy to see how Margolis finds boundless inspiration and energy from the round wonder. Margolis repetitively creates the shape to map out the inner dialogues of the mind. Influenced by her psychology background, she is determined to show audiences how our minds work with her art.

Rooms: Would you mind telling us a bit about yourself?

What drives me as an artist is trying to find out who I am.  I feel like I exist in a fluid state within the world around me, absorbing certainties of others with no absolutes of my own.  I spend a lot of time studying people’s behavior and writing about it.  I’m influenced by Diane Arbus’ observation of “the gap between what you want people to know about you and what you can’t help people knowing about you”.  Her work made me hyper-aware of the unconscious signals we all send out and compelled me to look below the surfaces of others as well as myself, to see the reality; so, I am focused on trying to reconcile the inner and outer me.

Rooms: Your original field of study was in psychology. Does this come to play in your artwork?

Very much so.  As a child I had a lot of phobias and had become somewhat obsessed with the idea that there is another sort of energy inside of me that I could not articulate.  I had seen a movie called “Forbidden Planet” that featured invisible creatures from the id and that really got my attention.  After that, I found some books in the library on the inner workings of the mind and psychology became a lifelong fascination for me.  In college, I focused on the brain and Experimental Psychology, which dealt with processes that underlie behavior.  I didn’t know what I wanted to do with psychology and ultimately dropped out of Grad School.  My route has been rather circuitous, but as an artist, I wanted my work to be about mental operations, to somehow capture the mechanics of the mind.  Also, it couldn’t be personal and had to be about the universal.  I used myself as a subject because it was easier. As an avid diarist with over 20 years of journal entries and detailed narratives of my dreams, I thought that they might be good material to begin with and created a system to chart and encode my interior monologues by translating them into colored fields of dots. These compositions on paper are visual diaries, encoded interior monologues. Working from my journals, I translate feelings into colored dots.  My rules are rather loose and, depending on the writings, I use one day or a week that I transcribe into colors.  I simultaneously divulge and conceal my intimate feelings.

Rooms: The circle is evidently a key component to your work. It represents the molecule, a neurotransmitter and an Enso (the sacred symbol in Zen Buddhism). The circle brings science and spirituality together in your art. Is this how you manifest all your identities and roles at once?

I look for the connective tissue between the universe and the microscopic.  I have found it in the circle.  It relates everything.  As the most basic component in the universe, the circle can be found in all of nature as well as in religious symbols, like a halo or the Sephirot in the Kabbalah.  I practice Zen Buddhism and became interested in the Enso because it represents infinity, perfection, and totality.  Layering my metaphysical beliefs with chemical reactions in the brain became the basis of my work.  This way I am able to reconcile the physical with the metaphysical

Rooms: Is the process of creating the circles a form of mediation, personal psychoanalysis, or trephining?

Creating circles is immensely satisfying.  In meditation, you focus on your breaths and clarity somehow emerges; as thoughts pop into your head you can see that they are not real and eventually you are not held hostage by your beliefs.  My process has evolved into a synthesis of meditation, stream of consciousness thinking in which I work through obsessive thoughts, and physical pain, particularly when I am burning, which I metaphorically relate to trephining.  I first learned of trephination (drilling holes into people’s heads) when I wrote a paper chronicling the treatment of mental illness, and the torture of it stuck with me.  It was repulsive and compelling.

Rooms: You had a series where you created circles with maps. What meaning did the maps bring to your work?

I’m drawn to maps because they offer an implicit promise that they will help you find your way.  In my work, the maps act as proxy for the physical self. Additionally, they frustrate expectations of any help navigating through the world.  I use maps to explore arbitrary destruction and regeneration in the journey of life.  After burning holes in maps, I layer them on top of each other; passages to new locations are created in places that have been lost.  I invoke into my maps my philosophy that in loss something new and unexpected is found.

Rooms: Are the colors you use to represent emotions based on socialization and culture or personal instinct of how they would look?

I wanted to develop a standardized flow chart of emotions and worked with the Pantone Color System to designate a color to each emotion and coordinate families of emotions to color families (tints, saturated hues and shades).  I knew from the start of this endeavor that I would not be able to have an intuitively based color chart, but, where possible, I used expected colors for emotions, like green for envy.  The charts are a continual work in progress; I add new emotions to the chart as they come into my consciousness.

Rooms: By playing with the circle, you affect its perfection.

I am attracted to perfection but celebrate Wabi-sabi, the Japanese philosophy around the beauty of imperfection, aging, and deterioration.  I don’t think people would be very interesting without their paradoxes.  I reconcile oppositions within my work, “without darkness, there can be no light”.

Rooms: Your work seems extremely meticulous. Are you a perfectionist in all other aspects of your life?

I do immerse myself in details; it is just how I operate in the world, it’s not planned or thought out.  That said, I am anything but a perfectionist.   My mind is such a roiling sea of chaos that obsessive as I may be, nothing is perfect and all is a compromise. 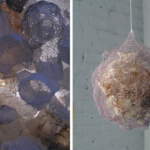 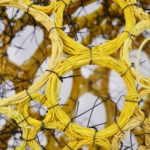 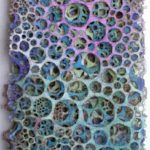 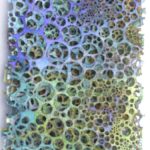 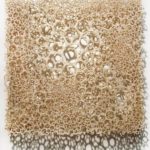 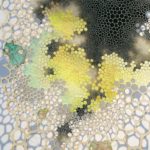 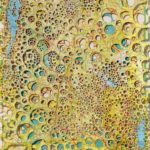 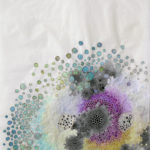 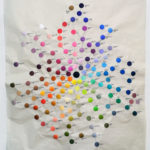 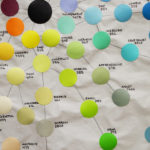