[vc_row type=”in_container” scene_position=”center” text_color=”dark” text_align=”left” overlay_strength=”0.3″][vc_column column_padding=”no-extra-padding” column_padding_position=”all” background_color_opacity=”1″ background_hover_color_opacity=”1″ width=”1/1″][vc_column_text]JR is a pseudonym of a French artist who flyposts*  large black-and-white photographs on the street, often challenging advertising and media by the use of portraiture and community involvement. In 2010, JR won the TED Prize for 2011. He used the $100,000 award money to start the Inside Out Project.

*Flyposting (sometimes known as wild posting or bill posting) is the placing of art, advertising posters or flyers in legal or illegal places, often paper images applied with wheat paste.

Look what he just did for the Olympics in Rio! 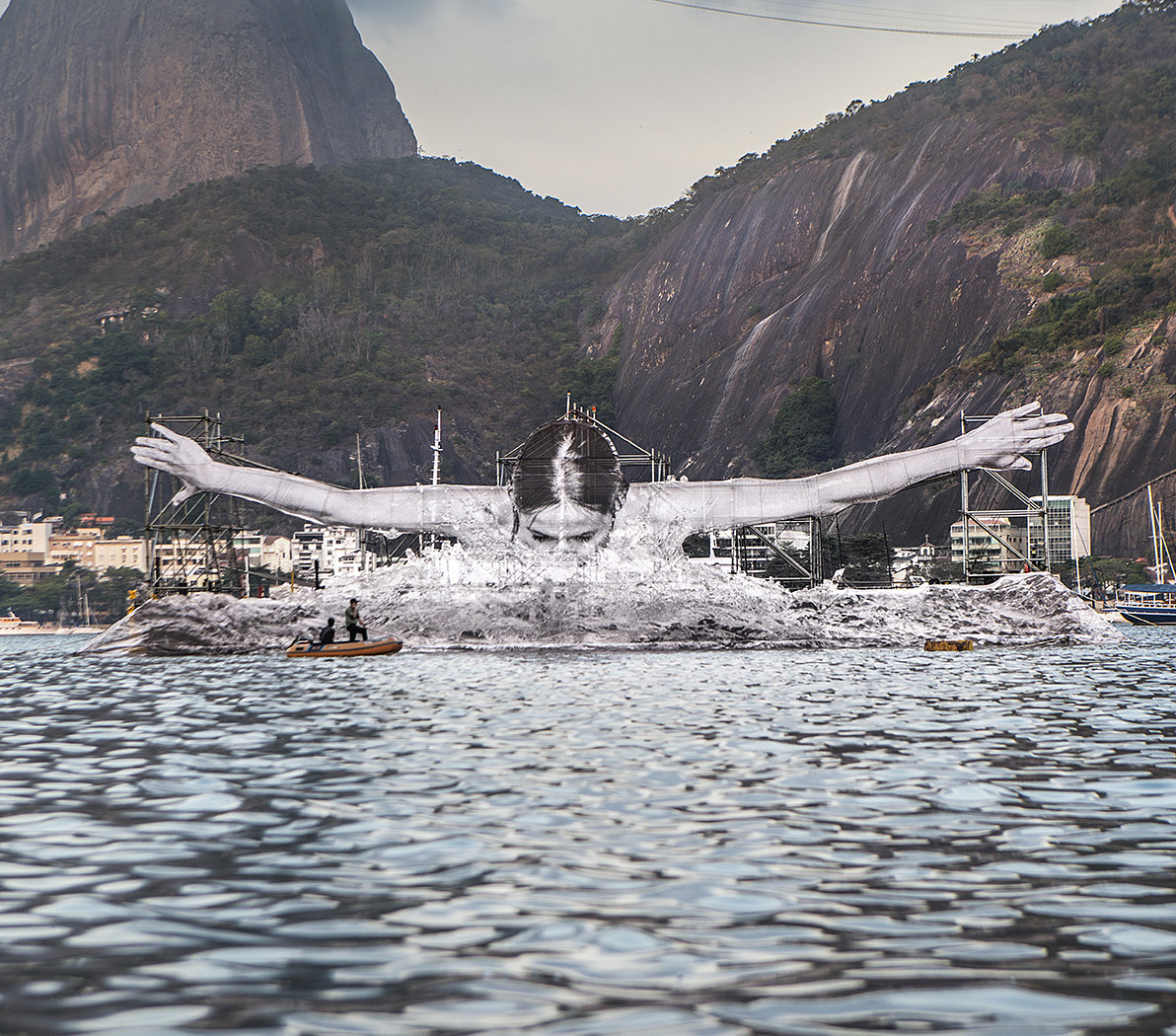 “Usually people will try to hide the scaffolding, but not in this case — it’s part of the work.” — MARC AZOULAY, the director of JR’s New York studio CreditJR-ART.net

Michael Phelps has nothing on her: The French triathlete Léonie Periault, rising out of Guanabara Bay in Rio, is caught mid-lap, looming over the water, her wingspan stretching more than 98 feet.

Ms. Periault is not competing in the Olympics, but she is there, represented in black and white and surrounded by scaffolding, thanks to the French artist JR. Her image is one of three giant sculptures JR installed around the city, as one of the Olympics’ first artists in residence. The program, which began this year, was intended to “open up Olympism and its values to the widest possible audience,” according to a statement by the Olympic committee. (The other artists in residence are the German writer Tilman Spengler and Gerald Andal, an American Vine star.) 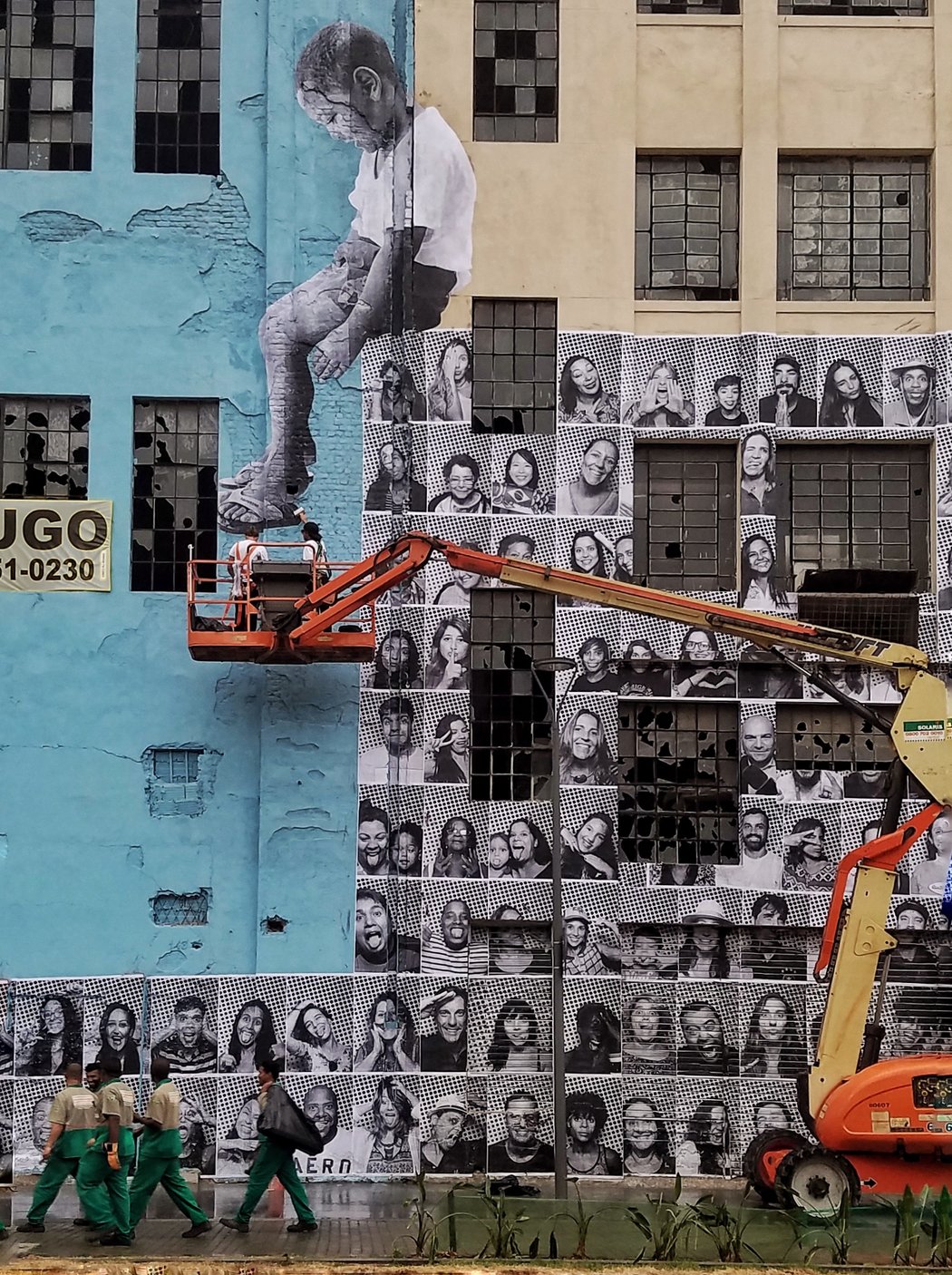 “I don’t only want to do work in the favela — I want to create bridges. That’s the main goal in a city like Rio, where there’s such a concentration of people, and also a separation of people.” — JR CreditJR-ART.net

JR’s pieces may have the biggest visual impact in Rio, where he has a long history. His 2008 project there, “Women Are Heroes,” in which he pasted oversize photos of the faces and eyes of women on buildings in their hillside slum, helped earn him the TED prize a few years later, and cemented his international reputation as a street artist. In 2009, he founded Casa Amarela, a cultural and education center, in one of Rio’s oldest favelas, which he still visits regularly.

His work for the Olympics — his biggest-budget project ever, he said, though he would not disclose the cost — and an independent addition to Casa Amarela complements his long-running “Inside Out” photo series, turning urban landscapes into canvasses. A roving photo truck that produces large-scale portraits, which JR’s team then pastes around the city, has been a hit with locals and international visitors alike. It will make its way to the Olympic Village next.

For the sculptures, JR photographed young athletes who may one day make it to the Games, people who are still “working hard for the passion of sport.” There’s Ali Mohd Younes Idriss, a Sudanese high jumper who trains in Germany, and missed his chance for an Olympic trial this year because of an injury. In JR’s vision, he’s leaping over an abandoned apartment building, backward.

That leap may be analogous to pulling off the installation in Rio, amid an Olympics unusually besieged with problems. Even the commission to do the project didn’t solidify until just a few months ago. “In Brazil, everything’s possible — it’s really hard, but it’s possible,” JR said.

That’s the message sent by the Casa Amarela installation: a silver moon perched atop the building, high above anything else in the favela. It will eventually be a bedroom for an artist in residence there, said Marc Azoulay, the director of JR’s New York studio, who lived in Brazil and oversees Casa Amarela. “It’s a big statement for the community,” Mr. Azoulay said, “to say that anyone can reach the moon.”